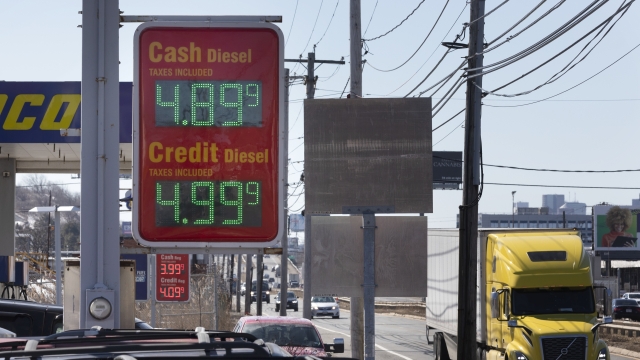 SMS
Gas Prices Skyrocket Amid Reduced Access To Russia's Oil Supply
By James Packard
By James Packard
March 4, 2022
A petroleum analyst says sanctions the U.S. and its allies have placed on Russia are essentially blocking access to Russia’s crude oil.

A deadly war in Europe is spreading its economic effects across the world.

As gas prices skyrocket, rideshare drivers are hanging up the keys.

"It's very tough to make a living out of that right now," said Las Vegas rideshare driver Dave Carpenter. Carpenter says his cut of the rides he gives aren't enough to keep up.

"Your average hop after you pay your commission is $3," Carpenter said.

It's the local cost of standing up to bullies.

"The U.S. and its partners, obviously, have responded with some very severe sanctions," said Patrick De Haan, petroleum analyst at GasBuddy. "Those sanctions are now essentially blocking access to Russia’s crude oil.”

Others give a critical perspective on the pain.

"I feel like it’s a small price to pay compared to what people in Ukraine are dealing with right now," driver Melissa Wellington said.

That said, with inflation high and low-income American families still trying to claw back from the pandemic, fuel costs are just adding to the fire.

President Biden has vowed to ease the financial burden, announcing a release of 60 million barrels of oil from stockpiles.

But it’s done little so far.

"Some consumers are going to be forced to make some very challenging decisions in the days and weeks ahead," De Haan said.

Still, with rocket attacks on civilians, hundreds dead and the very foundation of a free democracy under siege, it’s the least of the consequences of war.