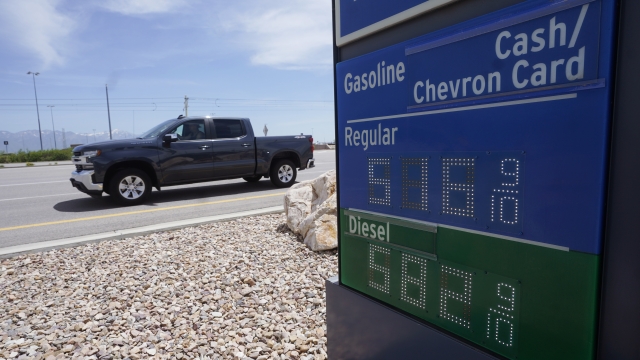 SMS
National Gas Price Average Surges To Record $5 A Gallon
By Isbella Diaz
By Isbella Diaz
June 10, 2022
In May, inflation hit a new 40-year high of 8.6%. The Labor Department says gas prices alone were up about 50% compared to the same time last year.

Drivers across the U.S. are dreading heading to the pump.

"It's frustrating. It's hard to afford."

"You know, you got to decide, is it really worth it to go out there or not?"

"There's no fluctuation. No up or down anymore. It's just simply … up."

And that's far from just drivers' opinions; It's a reality.

That's Gas Buddy's national average, but AAA's average is expected to hit the same mark over the weekend and surging inflation is playing a big role in that spike.

Last month, inflation hit a new 40-year high of 8.6%. The Labor Department says gas prices alone were up about 50% compared to the same time last year.

Another issue at play is hurricane season. Here's why: NOAA is predicting an above-average season, with up to 10 hurricanes and as many as 6 major hurricanes. Those storms can force off-shore oil refineries to shut down. That has ripple effects throughout the fuel industry, causing supply shortages and making gas prices spiral even further.

"It's just a matter of falling supply and rising demand, and that's pushed up the national average significantly," De Haan continued. "And it looks like we continue to see supplies declining."

Despite all this, drivers are still getting behind the wheel. AAA estimates some 35 million drivers were on the road for Memorial Day. And with summer being peak driving season, that's unlikely to change right away.

A poll by The Washington Post and George Mason University found about 45% of drivers were only partially filling their tanks, while 30% were driving slower just to increase mileage.

But for drivers in places like California, where the statewide average is $6.45, it's already surpassed the $5 average, impacting nearly every moment of every day.

"It's a lot of other things I can't do because I have to pay for gas," Oakland resident Quentin McZeal said. "Less food, less playtime because I got to get gas, I got to go to work, right?"

And while a mass of factors may be impacting prices here at home — and across the globe — some drivers, already know who they blame.

"You know whose fault it is — the government," McZeal continued. "Come on, man. That war over there. Ukraine is causing us problems over here. Why? Where's our gas?"