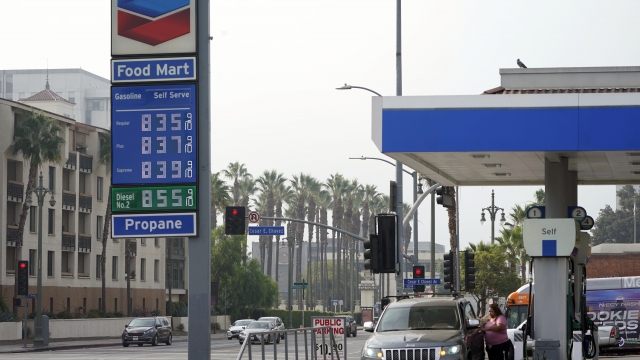 Gas prices are on the come up again, and in states like California, drivers are starting to really feel the pinch.

Gas prices are getting painfully high again, and it's expected to get much worse, as OPEC countries cut oil production far above the rate at which forecasters expected.

AAA is already reporting the national average for a gallon of regular gas is $3.87. It's nowhere near the peak above $5 from this summer, but it's still a financial pinch for some drivers, especially in states like California where the average is $6.42 a gallon.

Several of the state's oil refineries have had to shut down or slow down production amid maintenance issues. Meanwhile, state regulations require a special summertime blend intended to reduce pollution, but it's also more expensive.

California Gov. Gavin Newsom is asking the state air regulator to allow some of the cheaper winter blend to hit the market.

"There's a lot of alternatives," Gov. Newsom said. "We haven't made up our mind yet."

At a national level, President Joe Biden and his team are considering options to help bring prices down, including a further release of petroleum from the country's strategic reserve.

"We believe we have the tools here at home to work with our allies and to work with Congress to make sure that we address the mistake that OPEC made yesterday, which was the wrong direction," said Amos Hochstein, senior adviser for global energy security at the U.S. State Department.