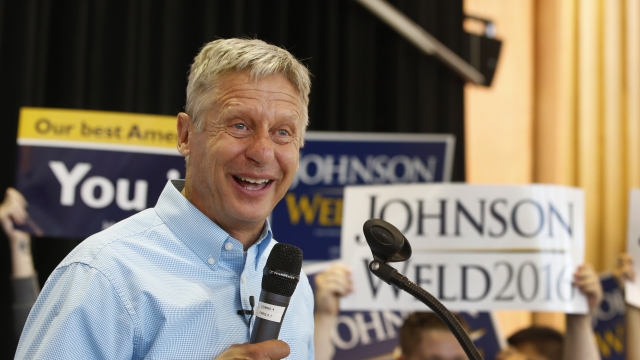 SMS
Gary Johnson Knows He's Running Out Of Time
By Grant Suneson
By Grant Suneson
August 28, 2016
If he can't secure 15 percent support before the first debate, he says it's game over.
SHOW TRANSCRIPT

Libertarian presidential candidate Gary Johnson knows he's running out of chances to make a real run at the White House.

"Would you agree that if you don't get into the debates it's game over?" Chris Wallace asked on Fox News on Sunday.

"Winning the election, yes, I would say, 'Game over,'" Johnson replied.

More than two-thirds of voters said they haven't heard enough about Gary Johnson, and getting onto the debate stage is the best way to change that.

To get there, he needs to poll at an average of 15 percent support in five different polls. Johnson said he's slowly but surely moving up, increasing his poll numbers by about four percentage points over the past six weeks. But he might be running out of time.

The first debate is slated for September 26. The Commission on Presidential Debates says the cutoff for participation will be made after Labor Day, but "sufficiently in advance of the first-scheduled debate to allow for orderly planning."

The most recent polls have Johnson close to a 10 percent average, but there's reason for optimism. Neither Trump nor Clinton has been able to maintain a positive image.

Trump's first two de facto campaign managers are gone, and staffers say the campaign is in disarray. Meanwhile, Hillary Clinton is fending off speculation that the Clinton Foundation worked as a pay-for-play operation while she was secretary of state.

Clinton and Trump are disliked by most voters, and that could leave the door wide open for Johnson. And even if they don't support him, a Quinnipiac poll shows that most voters think Johnson should be included in debates.