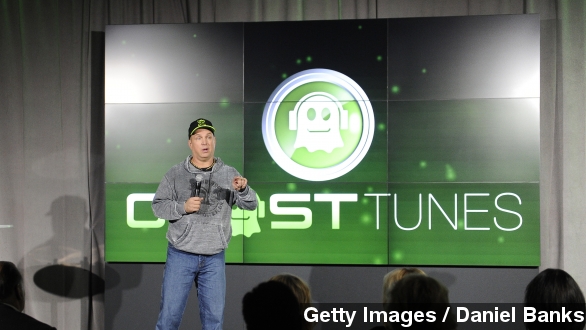 After taking a temporary retirement in 2001, country music icon Garth Brooks returns 13 years later with his new album, "Man Against Machine" — and the mechanical force Brooks is fighting could be Apple.

The country singer's hiatus ended Monday as he released "Man Against Machine" on a self-funded platform called GhostTunes. The service is a direct competitor of Apple's iTunes, which dominates the realm of digital music sales.

However, Garth's GhostTunes strives to upend the middleman by allowing artists of all genres to determine what they sell on the site and for what price. (Video via ABC)

GHOSTTUNES: "We are more than a purchase platform. We provide an experience with the artists you love."

Purchased music can be downloaded and streamed from a personal "locker" at any time. It also allows artists to bundle ticket sales with albums for discounted prices. GhostTunes takes a 20 percent cut of sales, which is less than its competitors.

The site launched its Beta version in September, but now it's live and adding new features every week. "Man Against Machine" is available solely on GhostTunes today, along with all of Brooks' other music.  (Video via Milwaukee Journal Sentinel)

Meaning his fan base can't buy any of his albums on iTunes or stream them on Spotify, which could give fans a compelling reason to at least sign up for the service.

When Brooks announced a temporary retirement in 2001, CD sales were still at the top of their game and iTunes was a vacant lot waiting for more artists to join. Brooks admits things have changed in the past decade.

"It's been an uphill battle."

In an interview he told USA Today he didn't expect "all the rules to change." So after meeting with other purchase platforms, Brooks adapted to the new environment by creating GhostTunes.

The service already represents not only Brooks, but also 10 million songs, thousands of artists, three major record labels and a handful of independents.

Brooks isn't the first to distance himself from iTunes. For years, sites like Topspin Media, Bandcamp and eMusic have put the power of selling into the artists' hands.

And The Wall Street Journal warns Brooks' power play might have launched too late.

As GhostTunes begins to roll out, Brooks' comeback will likely overshadow the service for now. His new world tour has already sold more than a million tickets for shows in eight U.S. cities.