Garage Where Deep Throat Revealed Secrets To Be Demolished 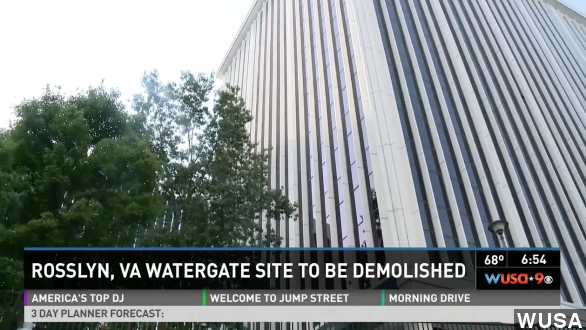 SMS
Garage Where Deep Throat Revealed Secrets To Be Demolished

By Lauren Zima
June 16, 2014
The spot where the source known as Deep Throat once spilled secrets to journalist Bob Woodward is set to be demolished.
SHOW TRANSCRIPT

It helped take down President Richard Nixon, and now, it's being taken down. The parking garage where the mysterious informant known as Deep Throat provided secrets about the Watergate scandal will be demolished.

"The Arlington County Board has now voted to demolish the garage and replace it with a 28-story residential tower and 24-story commercial building."

Of course, the garage is where Washington Post reporter Bob Woodward met the source then known as Deep Throat in the early 1970s during the Watergate scandal, chronicled in the movie "All The President's Men." Former F.B.I. agent Mark Felt revealed himself as Deep Throat in 2005. (Via Warner Bros.)

And the Post wrote of the tear-down news, "One of the most historic journalism sites of the past half-century will soon vanish."

Felt picked the garage because it was anonymous. He was the second-highest official in the FBI at the time, and told Vanity Fair in his 2005 reveal that the garage offered a dark venue with a clear view of potential intruders.

Now, the spot could offer good news for Rossalyn, Virginia, where it's located. The Post also notes the local county board seems excited about the construction, saying the new buildings will bring affordable housing, and office and retail space.

"Developers plan to replace the 60s-era complex with a mixed-use development. A marker noting the location's historical significance will remain." (Via WJLA)

The landowner has also promised to construct some kind of memorial to the events at the site. The garage is scheduled to be demolished no earlier than January of 2017. This year marks the 40th anniversary of President Nixon leaving the White House following the scandal.