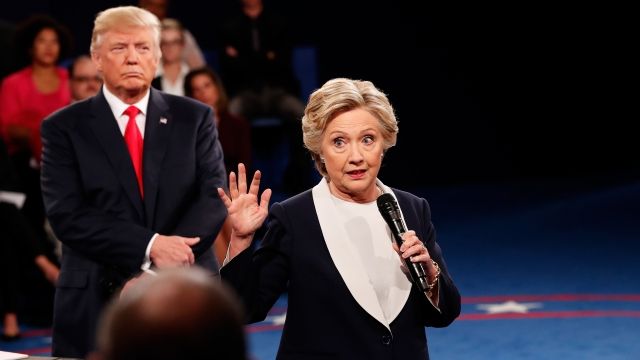 SMS
Trump Might Be Gaining On Clinton As She Faces More Email Scrutiny
By Lindsey Pulse
By Lindsey Pulse
October 29, 2016
A recent poll has Donald Trump with 45 percent of the vote and Hillary Clinton with 46 percent.
SHOW TRANSCRIPT

A new poll suggests the gap between Donald Trump and Hillary Clinton is narrowing.

Back in mid-October, an ABC News/Washington Post poll showed the Democratic nominee had a 12-point advantage on her Republican counterpart. But this latest poll shows only a 1-point gap between the candidates.

Clinton is leading at 46 percent and Trump is at 45 percent. And that jump for Trump could have something to do with the FBI's latest announcement regarding the Clinton email scandal.

The latest poll also shows Gary Johnson polling at 4 percent of the vote and Jill Stein at 2 percent.

The poll asked voters how the the FBI's newest review of Clinton's emails would affect their voting preference. While many voters remained unmoved, a little over a third said they're less likely to support the Democratic nominee.

On Friday, FBI Director James Comey said the agency is investigating some newly discovered emails related to the Clinton campaign.

The FBI reportedly recovered the new batch of emails from a device used by former U.S. Rep. Anthony Weiner during an investigation into his alleged sexting with an underage girl.

A key point here is the FBI doesn't know if the newly discovered emails are relevant to the prior investigation of Clinton's private email server. Comey even said the FBI "cannot yet assess whether or not this material may be significant."

The Clinton campaign is calling for transparency from the law enforcement body as it looks into the emails.

This is just the latest scandal that's come as election polls flip-flop. Trump's favorability went down in early October after the release of the "Access Hollywood" footage showed him joking about groping women.

Correction: A previous version of this video incorrectly assumed that an earlier poll was taken after the investigation into new Clinton emails was announced. This video has been updated with the latest poll that now includes that analysis.