Psy No Longer Has The Most-Watched Video On YouTube 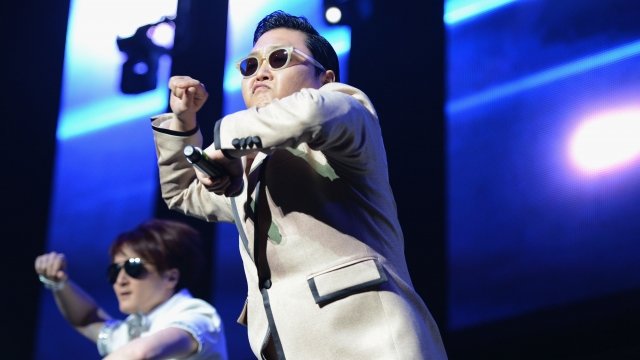 Sorry, Psy. The South Korean singer can no longer say he has the most-watched video on YouTube.

The video for his mega-hit "Gangnam Style" — uploaded in July 2012 — held the YouTube throne for almost five years. As of July 11, the vid has been watched almost 2.9 billion times.

It's now been beaten out by Wiz Khalifa and Charlie Puth's 2015 tear-jerking song "See You Again."

It was written as a tribute to actor Paul Walker, who died while filming the seventh installment in the "Fast and Furious" franchise.

But "See You Again" might not reign supreme for long. The music video for "Despacito" — the original version, not the Justin Bieber remix — is skyrocketing up the charts. Released at the start of 2017, it's already been watched almost 2.5 billion times.

Music videos, including ones by Taylor Swift, Katy Perry, Mark Ronson and Maroon 5, account for nine of the 10 most-watched videos on YouTube as of mid-July.

The one outlier is a video for a Russian animated children's show called "Masha and the Bear."

Don't feel too bad for Psy. After all, his "Gangnam Style" video will always be remembered as the one that actually "broke" YouTube. Not a bad consolation prize, right?