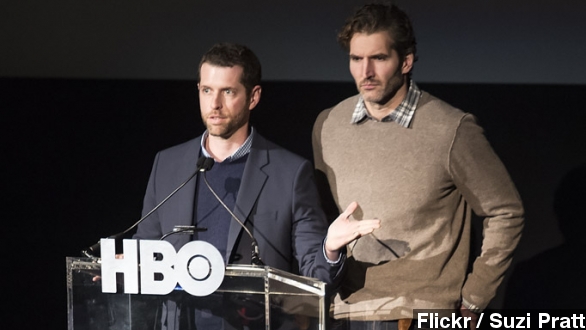 ​As we all speculate about King Joffrey's brutal rule over Westeros, at least we know the prosperous and benevolent reign of "Game of Thrones" showrunners David Benioff and D.B. Weiss will continue.

Entertainment Weekly first reported Friday that Benioff and Weiss would return to the medieval drama for at least two more years of treachery, dragons and killing off your favorite characters on a regular basis.

Going into its fourth season, "Thrones" has solidified itself as HBO's most-watched show, with 14.3 million viewers last year. That's the second-most watched ever for the network, behind only "The Sopranos." (Via The Wall Street Journal)

And that upcoming fourth season has been called the bloodiest and craziest one yet, a claim that seems hard to believe after last season's heart-stopping finish. Although we suppose author George R.R. Martin would know.

With a few seasons to go and two more books to write, the author recently discussed the idea of a feature-length "Thrones" film to cap the series. (Via io9)

But some fans think that's a bad idea. Count Forbes contributor Merrill Barr among them, writing, "To green-light and start planning for a feature film now, will do nothing except set a horrible precedent that television is a throw away medium that does nothing but service feature films."

​It's all still speculation, though, so for now HBO will just promote the heck out of the show's upcoming premiere — whether it's with an epic exhibit at the South By Southwest festival or a maddening cover for Entertainment Weekly. Stupid Joffrey, that's not even how you hold a sword! (Via HBO)

Regardless, "Game of Thrones" will continue its deadly lust for power with the season four premiere April 6.