'Game Of Thrones' On Sunday Will Be The Biggest Episode Ever 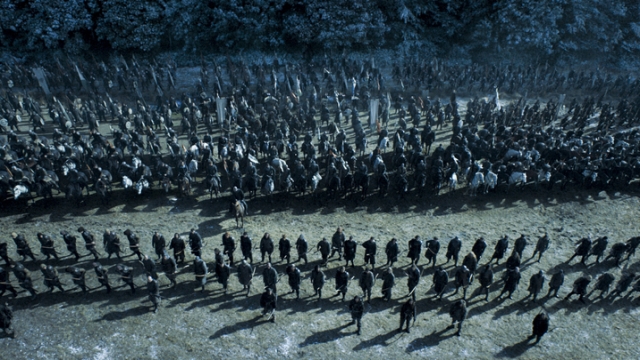 SMS
'Game Of Thrones' On Sunday Will Be The Biggest Episode Ever
By Grant Suneson
By Grant Suneson
June 16, 2016
It reportedly took more than 600 crew members and 500 extras to make the climactic "Game of Thrones" episode "Battle of the Bastards."
SHOW TRANSCRIPT

As if "Game of Thrones" didn't get enough hype on a weekly basis, Sunday's episode promises to be one of the biggest in series history. Spoiler alert if you're not caught up.

Showrunners David Benioff and D.B. Weiss said the ninth episode of the season, titled "Battle of the Bastards," will feature the biggest battle sequence ever shot for "Game of Thrones."

It reportedly took quite a bit of manpower and horsepower to pull off the epic battle between the villainous Ramsay Bolton and the newly revived Jon Snow.

Entertainment Weekly reported that it took 600 crew members — including four camera crews — to capture the 500 extras, 25 stunt performers and 70 horses needed to bring the climactic battle between the Boltons and Jon Snow's allies to life. No word on whether any direwolves made an appearance.

"Game of Thrones" is known for going big in each season's penultimate episode. Season four, episode nine featured the massive battle at the wall; season two had the epic battle at Blackwater; and we all remember the devastating Red Wedding episode in season three.

Given that "Game of Thrones" has no problem killing off some of its more popular characters, fans will be watching with bated breath as so many beloved characters are put in harm's way.

If you can bear to watch, "Battle of the Bastards" airs Sunday at 9 p.m. Eastern on HBO.