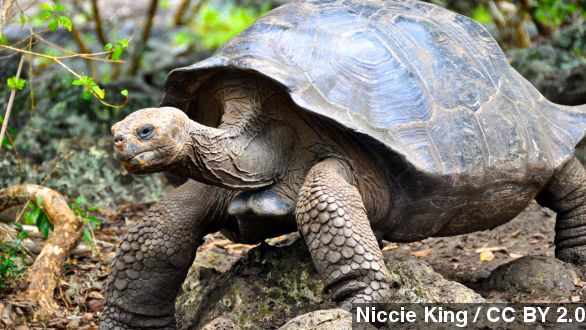 By Sebastian Martinez
October 29, 2014
The Galapagos tortoise has made a stupendous recovery from the brink of extinction to a population of more than 1,000. But it still faces threats.
SHOW TRANSCRIPT

From 15 to more than 1,000 — the recovery of the Galapagos tortoise over the past few decades is nothing short of remarkable.

A new study in the journal PLOS One charts exactly how the tortoises recovered in an effort to better understand the science of reintroducing species.

By the early 1970s, tortoise populations in the Galapagos had been devastated by invasive feral goats, who had essentially stripped a lot of the vegetation the tortoises need to survive. (Video via Google)

So, starting in the 1990s, a program started to get rid the goats by systematically hunting them until they were virtually eradicated from the islands. (Video via BBC)

The elaborate system of hunting the goats, which Radiolab did an extensive report on in the summer, removed close to 90 percent of the goats in under a year.

JOSH DONLAN VIA WNYC: "It's relatively easy to remove 90 percent of a goat population from an island. But as they become rarer and rarer they're harder and harder to detect."
TIM HOWARD: "So the goats start hiding."

You can check out that show to find out how so-called "Judas goats" were used to eventually kill off the last of some 250,000 goats on the island. The new study, however, says even though they're gone, the goats' impact is going to be felt for a while.

The study says the goats damaged some plant species more than others, in particular making it hard for the cacti the tortoises feed off to spread, and allowing woody plants, which restrict their movement, to propagate. (Video via National Geographic)

The study's lead author, Professor James Gibbs, told The Washington Post: "'The tortoises will eventually recover everything themselves, but it's going to take a very long time,' Gibbs said. If the Galapagos National Park Service wants the island restored fully in less than a few hundred years, they may need to go in and clear out some of the woody vegetation themselves."

The study did say, despite the ecosystem recovery being a long-term process, tortoise populations are now self-sustaining.

This video includes an image from Niccie King / CC BY 2.0.