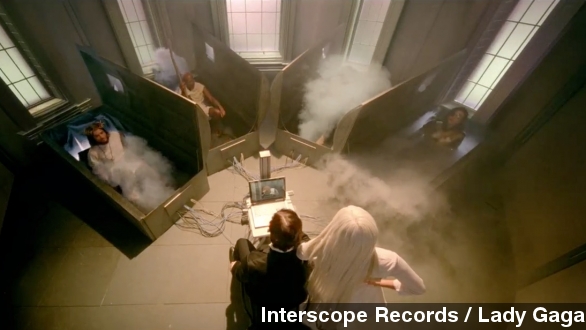 I think one thing we can all agree on is to never underestimate Lady Gaga's knack for being bizarre and her newest video is the picture perfect example. It's a lot to take in, but here's a 12 second summary.

The mansion featured in the video is the famous Hearst Castle, built by media icon William Randolph Hearst. (Via YouTube / California Travel Tips)

After there being no real video for ARTPOP's second single, "Do What You Want" and a relatively short, fairly normal video for "Applause," Slant Magazine points out, Lady Gaga was due for an eclectic music video per a statement she published on her fan forum. (Via NBC / Slant Magazine)

"The next few months of ARTPOP will truly be its beginning. Because those who did not care about ARTPOP's success are now gone, and the dreams I have been planning can now come to fruition." (Via Little Monsters)

Mother Monster released that statement three months ago, and we're beginning to think Gaga's creativity shouldn't be bottled up for that long ever again.

Entertainment Weekly writes of the new music video, "We’ll be formulating crackpot theories about this opus for days. (Is the whole thing an ode to Hollywood, old and new? A tongue-in-somebody-else’s-cheek satire of corporate subservience? An unusable ad for The LEGO Movie?)"

And Metro adds, "Even by Gaga standards it’s pretty crazy but at least no throws up on her."

Because it's not like it would be the first time... (Via TMZ)

But it seems the little monsters are once again in love, and so is Andy Cohen.