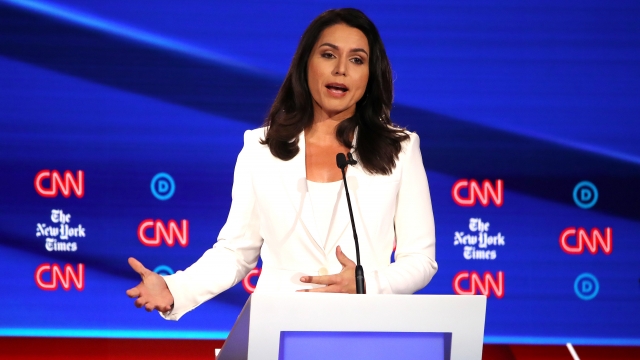 SMS
Gabbard Won't Seek Reelection In Congress To Focus On Presidential Run
By LeeAnne Lowry
By LeeAnne Lowry
October 25, 2019
U.S. Rep. Tulsi Gabbard said she can best serve the people of Hawaii and the country as president.
SHOW TRANSCRIPT

U.S. Rep. and Democratic presidential hopeful Tulsi Gabbard says she won't seek reelection to Congress so she can focus on her White House bid. She made the announcement in a series of tweets Thursday night.

Gabbard said in an announcement video: "Washington, our country and the world is in dire need of Aloha. Only Aloha has the power to heal the divisive wounds in our nation."

Gabbard's name has been popping up more lately after a scuff with former presidential nominee Hillary Clinton last week. News outlets, including Newsy, reported that Clinton said a female presidential candidate — later confirmed to be Gabbard — is a "favorite of the Russians" and that Russia is "grooming" her for a third-party run. Outlets have since issued a correction on one of those statements — Clinton actually said Republicans were grooming Gabbard.

But Clinton did say Gabbard is a "favorite of the Russians," and it isn't unfounded — Newsy reported back in February that Russian propaganda sites are promoting the Hawaii representative.

Gabbard said she believes Clinton has led a "concerted campaign" to damage Gabbard's reputation using "proxies and powerful allies in the corporate media and war machine."