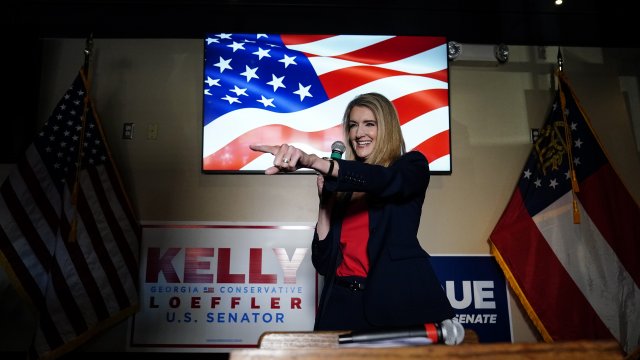 Georgia Republican Sen. Kelly Loeffler says she is undergoing more COVID tests after a number of mixed results this weekend.

It's a predicament that could hinder her ability to campaign in a closely-watched re-election effort.

Loeffler's campaign spokesperson said she will continue to self-isolate and be retested again to hopefully receive consecutive negative test results.

The senator was maskless Friday around Vice President Mike Pence and fellow Georgia Sen. David Perdue. The trio traveled on a bus together and went to two campaign events, as both senators are facing runoffs.

As for the vice president... his office told the Atlanta Journal Constitution Sunday he was awaiting a “confirmatory test” from Loeffler before deciding his next step.

The situation presents a potential problem for a candidate with a January 5 election day looming.

Loeffler's Democratic opponent, Reverend Raphael Warnock, said, "I pray that her test results come back negative and that she is back on the campaign trail soon."