G20 Leaders Push US And China To Reach A Trade Deal 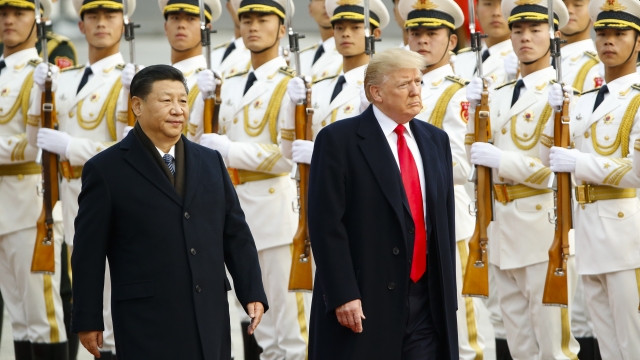 SMS
G20 Leaders Push US And China To Reach A Trade Deal
By Katherine Biek
By Katherine Biek
June 28, 2019
The world leaders brought up the issue a day before President Trump and his Chinese counterpart are scheduled to meet for a one-on-one meeting.
SHOW TRANSCRIPT

Multiple world leaders attending the Group of 20 summit in Japan are reportedly pushing President Donald Trump and his Chinese counterpart to reach a deal to end the trade war between their two countries.

According to The Guardian, Indian Prime Minister Narendra Modi, Russian President Vladimir Putin and the President of the European Commission Jean-Claude Juncker each brought up the issue Friday.

Earlier this week, U.S. Treasury Secretary Steven Mnuchin said that the U.S. and China were close to reaching a deal on trade. He added that he's hopeful Saturday's meeting between President Trump and Chinese President Xi Jinping could help clinch the deal.

For his part, President Trump appeared optimistic when asked Friday about the upcoming sit-down with Xi.

"We look forward to it. I think it'll be productive. ... Ultimately something will happen and it will only be good," the commander-in-chief told reporters.

According to The Wall Street Journal, during that meeting, Xi is expected to tell President Trump that in order for a deal to happen, China wants the U.S. to lift punitive tariffs on the country. China also reportedly wants the U.S. to remove its restrictions on the sale of U.S. technology to tech giant Huawei.

It's unclear if President Trump and his team of negotiators would accept those terms.