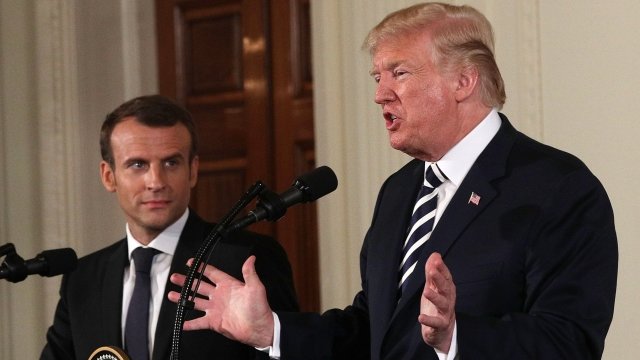 In a couple of weeks, President Trump will have to say whether the U.S. will be leaving the Iran nuclear deal. It's an agreement he's been highly critical of, so it didn't take long for him to mention Iran in his joint press conference with French President Macron on Tuesday.

"France and the United States also agree that Iran cannot be allowed to develop a nuclear weapon, and that regime must end its support for terrorism all over," Trump said. "No matter where you go in the Middle East, you see the fingerprints of Iran behind problems."

Macron enjoys a warm relationship with Trump, but he differs from the president on the Iran deal. While Macron acknowledges the deal has shortcomings, he wants Trump to work with Europe on improving the deal rather than tossing it.

Iran's nuclear capability isn't the only threat it poses, though. Macron and Trump also discussed its regional influence, particularly in conflicts like Syria. 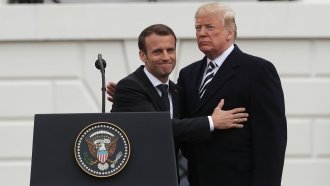 "As far as Syria is concerned, I would love to get out," Trump said. "I'd love to bring our incredible warriors back home ... And we've done a big favor to neighboring countries, frankly, but we've also done a favor for our country. With that being said, Emmanuel and myself have discussed the fact that we don't want to give Iran open season to the Mediterranean, especially since we really control it."

Trump's treatment of the Iran deal could endanger any hopes he has of striking a similar agreement with North Korea. So far, Trump doesn't seem too concerned about that: before the joint press conference, Trump praised North Korea's leader Kim Jong-un as "very open" and "very honorable."

However, he added afterward that he wants the country to fully denuclearize.