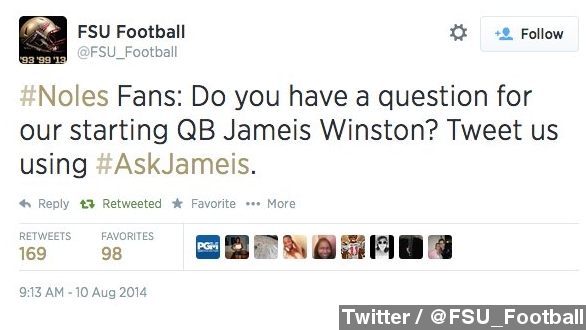 Heisman winning sophomore quarterback Jameis Winston is having a pretty low-key offseason, which is more than you can say about his off-the-field issues last year. Still, Florida State and Winston managed to draw up a bit of controversy Sunday after a well-intentioned social media move flopped.

Those questions, of course, are a jab at when Winston was cited for allegedly shopping lifting crab legs from a Tallahassee store earlier this year. Winston said he forgot to pay for them, but was still briefly suspended from the FSU baseball team. (Video via WCTV)

But, the Internet ridicule didn't stop there for Winston, as some went a little further than just poking fun at the crab stealing incident.

Winston was cleared of all charges in that case, though the Tallahassee Police Department's handling of the case brought many to question the legitimacy of the investigation.

FSU's flub brings to mind a few other well-intentioned PR stunts on Twitter that turned into just bad publicity.

J.P. Morgan had a similar Q&A session blow up in its face in November last year when the firm encouraged Twiter users to ask vice-chairman Jimmy Lee questions using #AskJPM.

CNN: "It didn't exactly work out how they planned. The masses, the average Twitter users are still very upset with J.P. Morgan and their perceived role in the financial crisis. "

The result was questions like, "Can I have my house back? #AskJPM" and "Is it true "JPM stands for "Just Pay More"? #AskJPM ;)."

J.P. Morgan later backed out of the Q&A by tweeting "Tomorrow's Q&A is cancelled. Bad Idea. Back to the drawing board."

More recently, the New York City Police Department also ran into some Internet vigilantes after asking for users photos of the NYPD. What they got wasn't  alot of good feedback

Winston hasn't yet responded to any of the questions on Twitter. Instead, the FSU feed says "selected" questions will be featured on its website later this week.