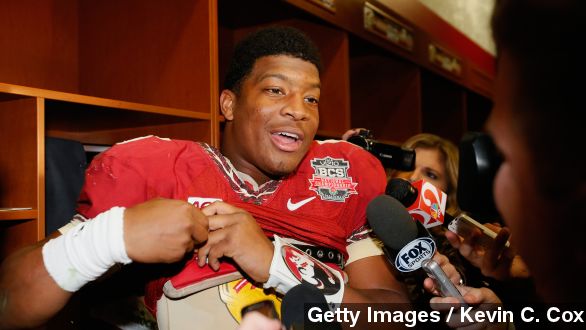 By Matt Picht
September 4, 2014
Florida State University has taken the first steps in an investigation of Jameis Winston, 21 months after he allegedy sexually assaulted a student.
SHOW TRANSCRIPT

Florida State Seminoles quarterback and Heisman trophy winner Jameis Winston is the subject of another sexual assault probe, this time from FSU directly.

The university is conducting a Title IX investigation into Winston's conduct after he was accused of sexually assaulting another student in late 2012. (Video via YouTube / Dustin Tackett)

After months of public turmoil surrounding the accusations, an investigation into the matter by the state of Florida resulted in no charges being filed against Winston.

But regardless of how the legal investigation against Winston turned out, FSU is mandated to conduct its own probe under Title IX — the federal statue banning gender discrimination — to determine if Winston broke the school's code of conduct. Which leaves just one question — what took the school so long?

It's been almost 21 months since the alleged incident, and the accuser's attorney told USA Today this is the first time the university has interviewed his client.

Back in April, another lawyer representing the alleged victim accused FSU of stalling the Title IX investigation. The school's handling of the case is itself being investigated by the Department of Education. (Video via WJHG)

But a Tampa Bay Times reporter says the university has a different explanation for why the case is taking so long.

While they declined to comment on the specifics, an FSU spokesperson said "in general, complainants control the timing in our process."

And a family rep for Winston went even further in a scathing letter, blaming the alleged victim for refusing to cooperate with the investigation. He added, "This is the fourth time [the alleged victim] has told her story. We anticipate the same conclusion that followed her previous three statements."

FSU is taking steps to address harassment on campus — on Wednesday, the school unveiled its kNOw MORE program, aimed at raising awareness and preventing sexual violence.