From The White House To Notre Dame: Why We Rebuild Historical Icons 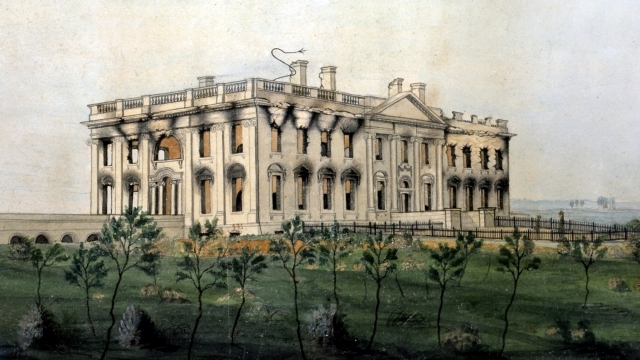 "I think with places like the White House and Notre Dame — these are places that really captured people's imaginations. They can quite literally step back in time when they're inside these buildings, and they see the architecture and the craftsmanship and the beauty and the artifacts. I mean, all these things tell stories."

Fires have damaged some of the most important buildings in world history. But while it may seem daunting to pick up the pieces in the immediate aftermath, history is also rife with reconstruction.

In the U.S., we only have to go back to 1814, when British troops burned down the White House and nearly all of Washington, D.C.

One person at the scene of the fire wrote: "The metropolis of our country was abandoned to its horrid fate." More than 200 years later, we spoke to historian Matthew Costello about the damage.

"The damage was pretty significant to the White House. The south side of the White House was probably in the best condition. But based on the records, the north side experienced the most structural damage, and then also the east and west walls. So portions of those walls had to be rebuilt and replaced after the war."

Government workers and White House servants were able to save artifacts like the Declaration of Independence, the U.S. Constitution and a painting of George Washington. But otherwise, most things inside the building were damaged beyond repair.

Politicians debated moving the capital somewhere else instead of rebuilding the White House and the city. But then-President James Madison and his supporters pushed to keep the capital in D.C. And three years later, in 1817, the White House was rebuilt.

"It's one of those buildings that I think everyone immediately recognizes. They know that that's where the president, the first family live. And it's a representation of who we are as Americans, how we define ourselves. ... So in many regards, that house represents a part of all of us — it's the people's house. And, you know, over time, I think it's one of those things that there's an enduring power to that idea that we all have a share or a claim in that house and its history and its occupants."

The cost of rebuilding the White House was estimated at more than $300,000 — almost $5 million today.

That number is significant, but small compared to the rebuilding costs of Windsor Castle or Rio de Janeiro's National Museum — $47 million and $12 million, respectively. Officials are still calculating the costs of rebuilding the Notre Dame Cathedral of Paris, but estimations are already in the billions of dollars.

"The American people are not that much different from the French people in that we've invested a lot of history in our traditions and in our buildings. And with the White House, it was very important to President Madison that this tragedy had occurred, but that the United States was going to be a country that rebuilds, not relocates."

"And it was that kind of grit and determination that I think really defined the American character. And I think the French people are very much the same way. They've seen much more in terms of revolutions and monarchy upheavals and world wars that were fought in France and Paris. But the French people, they will rebuild, much like the American people did after the 1814 fire."