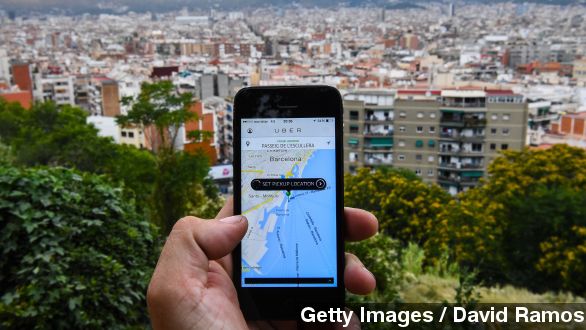 SMS
From Portland To New Delhi, Uber Faces Legal Battles
By Jamal Andress
By Jamal Andress
December 9, 2014
The city of Portland, one of the largest U.S. cities Uber initially shied away from, is suing the company and trying to combat Uber's rollout.
SHOW TRANSCRIPT

After the “God view” controversy and execs considering blackmail, Uber is at least facing a problem in Portland, Oregon, that it’s used to.

The city of Portland – one of the largest U.S. cities that Uber held off on going to – is suing the company and all around fighting Uber’s rollout.

Steve Novick said, “‘We’d rather you carve out a special deal for us.’ And I said ‘No, that’s unacceptable.’”

Steve Novick, Portland’s city commissioner, has claimed he will “throw the book” at Uber if it continues operating in the city illegally, threatening major fines for any Uber drivers caught picking up passengers: $1,000 on first offense, $2,500 on second offense, and $5,000 on third offense.

The city’s lawsuit also comes with a cease and desist letter demanding Uber drivers stop operating in the city and that Uber stop using this Portland, Oregon, sign in its advertising.

But threatening letters and finger-wagging from city government is par for the course for Uber.

From Washington, D.C. to London, England, Uber faces backlash wherever it goes, but only a few places have actually managed to stop the company from operating.

In Nevada, a judge recently issued a temporary injunction on Uber for the entire state. In the month Uber was operating, almost 50 Uber cars were impounded by state officials. (Video via KTNV)

And abroad, Spain as well as New Delhi, India, have banned the car service. (Video via Zoomin.TV UK)

A judge in Spain issued the ruling Tuesday, claiming, "[Drivers] lack the administrative authorisation to carry out the job, and the activity they carry out constitutes unfair competition."

And Monday, the New Delhi transport department banned the service in the Indian capital after an Uber driver was accused of rape.

Uber is estimated to be worth around $40 billion, and a writer for The Huffington Post says it got there with an “aggressive growth strategy … with little regard for local laws or issues.” But he does suggest Uber’s problems could be fixable.

He suggests Uber “start listening to its different constituencies and focus on the integrity of its service and responsibility towards its existing communities.”