Attacks On Mainstream Science Are Getting Louder Under Trump 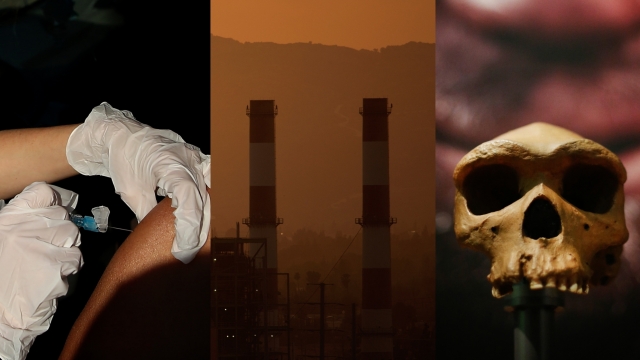 SMS
Attacks On Mainstream Science Are Getting Louder Under Trump
By Evan Thomas
By Evan Thomas
April 4, 2017
Minority views on science fields such as climate and vaccinations are gaining ground since President Donald Trump took office.
SHOW TRANSCRIPT

Many officials in the Trump administration hold views that counter scientific consensus. Now, fringe groups are taking advantage of that explicit and implicit support to push their agendas.

Four states have introduced "academic freedom" legislation this year. In South Dakota, for example, teachers would be free to question or deny evolution theory as long as it's done "in an objective scientific manner."

Last month, climate change skeptics sent a letter to the Trump administration, calling for withdrawal from the U.N. climate agency. They claim, among other things, that the current levels of CO2 in the atmosphere are beneficial.

At a sworn hearing on Capitol Hill, some urged Congress to establish research teams that would challenge scientific findings on climate change.

And vaccine skeptics are lobbying for an official commission to investigate just how effective and safe vaccines are, which is making physicians and medical researchers skittish.

Meanwhile, the scientific consensus on these issues hasn't changed. Evolution is a foundation of scientific research. The vast majority of researchers worldwide say increased levels of CO2 from humans are warming the climate. And more and more studies show vaccines do not cause autism.

But scientists expect they'll have to do more than ever to support the integrity of their work. They say it's not enough to let facts and evidence-based conclusions speak for themselves anymore.