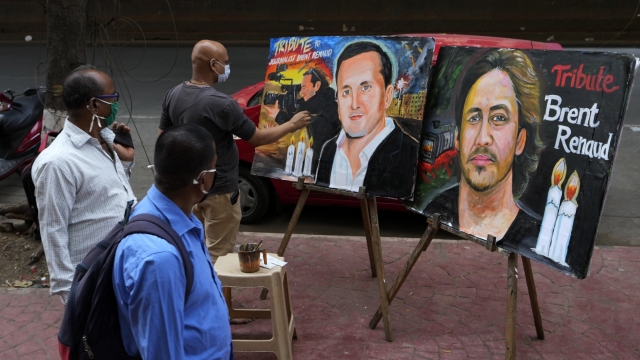 SMS
Friends Pay Tribute To U.S. Journalist Shot Dead In Ukraine
By Clayton Sandell
By Clayton Sandell
March 14, 2022
Brent Renaud was killed when Russian forces opened fire while he was in a suburb of Kyiv, Ukraine. His friends say he was a rare type of storyteller.

Colleagues and friends say Brent Renaud was a rare breed of journalist.

"I can't say enough about this incredible, complicated journalist, and what I mean by that is that he could get into any situation, go anywhere and get the story, get anyone to talk," Christof Putzel, Renaud's colleague and friend, said. "That's something I think that not every journalist could do. He also had clarity, like anyone I've ever seen, where - and he had no ego."

Renaud’s latest project was documenting the plight of refugees around the world.  On Sunday, he was in the a suburb of Kyiv, Ukraine with fellow journalists when Russian forces opened fire.

"We crossed the checkpoint, and they started shooting at us," said Juan Arredondo, a journalist who was injured. "So the driver turned around, and they kept shooting, there was two of us, my friend is Brent Renaud, and he's been shot and left behind."

"Brent went into situations, I think, most people don't have the courage to go into," Putzel said. "But he did it because he believed that much in what it is that we do because to him there was nothing more important than his job, than journalism."

Renaud was 50 years old. He and his brother Craig were a team of award-winning documentary filmmakers who traveled the world telling important, and often dangerous, stories, such as about drug wars in Mexico, earthquake aftermath in Haiti, life in war-torn Iraq and a documentary about the impact of violence on Chicago kids — the winner of a Peabody Award.

No matter where he went, colleagues say Renaud brought a sense of empathy that helped him blend in.

"He was a white guy from Arkansas who would not be looked at twice in Iraq," Putzel said. "Like, everyone thought that he was Iraqi. He goes into Ukraine. Everyone thinks he's Ukrainian. He's in South America, bro thinks he's from South America."

Renaud’s most important stories, friends say, were the ones where he could shine a light on human suffering.

"And that's what really set him apart was everybody mattered," Putzel said. "Everyone's voice mattered, especially if it was one that wasn't getting listened, and he would go to the end of the world like he did and risked everything to capture it. That's what made him so rare and now that's what also makes him such a loss [to] our profession."