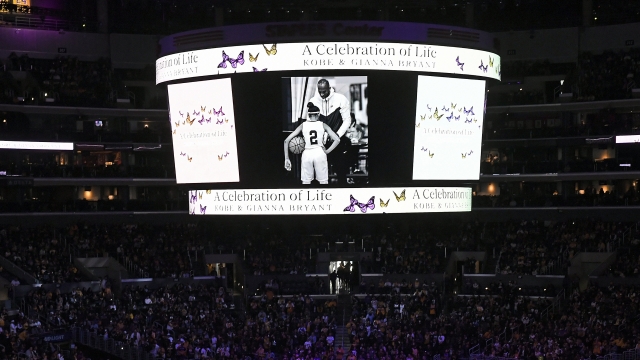 Thousands gathered at Los Angeles' Staples Center on Monday to pay tribute to NBA great Kobe Bryant and his 13-year-old daughter, Gianna. The Bryants and seven others died last month in a helicopter crash, which officials are still investigating.

Jimmy Kimmel guided the memorial service, saying "I'd like to invite you, right now, to take a moment to say hello to the people around you — whether you know them or not — to be grateful for life and for the fact that we are all here together."

Monday's memorial was a "Celebration of Life" with a limited number of tickets made available to the public. Proceeds were donated to Bryant's charity, the Mamba & Mambacita Sports Foundation.

Vanessa Bryant, Kobe Bryant's wife and Gianna's mother, said the date of the event, Feb. 24, 2020, represented the numbers the Bryants wore on the court and their years together.

She said, "God knew they couldn't be on this Earth without each other. He had to bring them home to heaven together. Babe, you take care of our Gigi, and I got Nani, Bebe and Coco. We're still the best team. We love and miss you, Boo Boo and Gigi."

The two-hour tribute featured performances by Beyoncé, Alicia Keys and Christina Aguilera. It showcased highlights of Bryant's championship career and family life, as well as remarks from family friends.

WNBA star Diana Taurasi said, "Gigi was in the midst of the best times of a basketball player's career — no responsibilities, no expectations, just basketball with your best friends. ... The same way Kobe inspired a generation of basketball players, Gigi, in turn, Kobe's interest in coaching and teaching the game."

Former teammate Shaquille O'Neal said, "I take comfort in the fact that, as we speak, Kobe and Gigi are holding hands, walking to the nearest basketball court." Kobe will show her some new mamba moves today and Gigi soon masters them. Kobe, you're heaven's MVP. I love you, my man — until we meet again. Rest in peace."

NBA legend Michael Jordan, Bryant's childhood idol, called Bryant a "little brother," saying his unmatched passion for everything he did brought out the best in others.

The memorial concluded with Bryant's own tribute to the sport, his Oscar-winning documentary short "Dear Basketball".

Kobe Bryant: "No matter what I do next, I'll always be that kid with the rolled-up socks, garbage can in the corner, five seconds on the clock, ball in my hands. Five, four, three, two, one."