Friday The 13th's Strawberry Moon Is Almost Too Unlucky 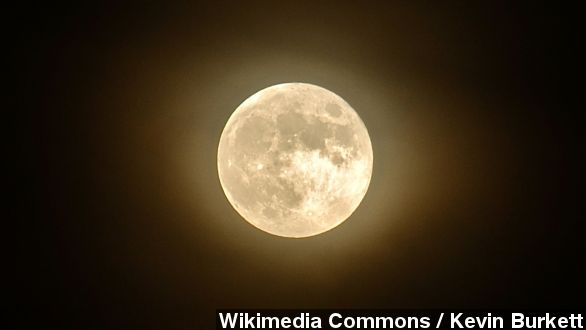 SMS
Friday The 13th's Strawberry Moon Is Almost Too Unlucky

By Madison Burke
June 12, 2014
Two great superstitions collide in a rare event that hasn't happened since 1919: a June full moon on Friday the 13th!
SHOW TRANSCRIPT

If you're the superstitious type, you probably already know Friday the 13th is coming up. But did you know you could be facing double the bad luck this year?

This Friday the 13th will also give us a full moon, a creepy coincidence that hasn't happened since the year 2000. (Via The Weather Network)

June's full moon has a couple different nicknames, including the Strawberry Moon, because it's during strawberry season. Its also called the Honey Moon because its position in the sky can give the moon a gold tint. (Via Wikimedia Commons / Kevin Burkett)

The last time one of June's full moons lined up with Friday the 13th was way back in 1919 — way before anyone thought "Friday the 13th: Honeymoon" sounded like a horror movie.

But why do the two events give some people the creeps? LiveScience says the origins of Friday the 13th superstitions aren't known, but probably stem from anxiety around Friday and the number 13 separately. The Independent explains the number 13 is bad luck in ancient Christian and Norse traditions and Friday was the day of most hangings in Britain.

As for full moons, the belief that they're unlucky also goes back to ancient times. Aristotle reportedly believed the brain was affected by the tug of the moon, just like ocean tides.

Even today, some police and hospital workers say full moons are more dangerous nights, a belief so widespread it's been studied for decades. (Via U.S. National Institutes of Health)

So, if you're prone to back luck, you might feel more comfortable just staying in this Friday. But there is some good news. (Via Youtube / FailTab)

"You won't have this coincidence again until Friday, August 13th, 2049." (Via The Weather Channel)

If you want to see the full moon at it's brightest, you'll have to stay up a little. The full moon will occur just after midnight Friday morning on the East Coast.