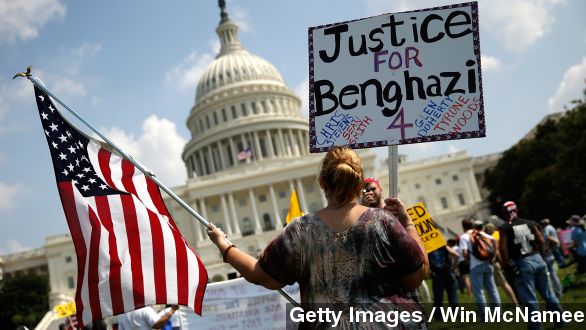 There's something in the industry we call a "Friday news dump."

Because Internet usage (and news consumption in general) drops over the weekend, when someone puts out news that they hope few people will notice, they usually announce it right about here.

The White House certainly does it, like when the president sent more troops into Iraq on Nov. 7.

And so do House Republicans, who announced Friday afternoon that a two-year investigation determined the Obama administration responded appropriately to 2012's attack on the Benghazi consulate. (Via The Blaze, NBC, The Wall Street Journal)

"Some of the myths, some of the more conspiratorial myths are being debunked," CNN's Brian Stelter said Saturday.

That Friday report by the Republican-led House Select Committee on Intelligence found 1) no intelligence failure prior to the attacks, 2) no evidence that the White House told the military to stand down during the attack and 3) no evidence that the CIA was involved in related arms shipments, but did find 4) the consulate was inadequately protected. (Via Getty Images)

As for the initial message from the Obama administration that the attack began with a spontaneous protest, the committee did find that inaccurate but blamed unclear intelligence reports, not a purposeful attempt from the White House to mislead.

The select committee's report on the Benghazi attack that killed four Americans took two years and thousands of hours of work in Congress.