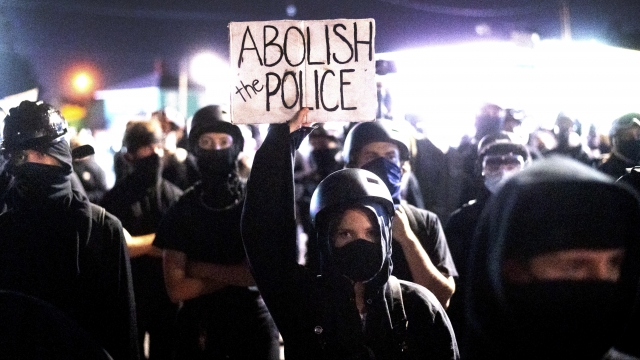 Friday marked another night of protests in Portland as well as numerous U.S. cities.

Portland, Oregon police declared an unlawful assembly after a couple hundred demonstrators marched to a police building. Demonstrators, including some calling for abolishing the police force, refused to disperse.

Officers ran down the street, pushing protesters out of the area and making multiple arrests. Police could be seen pinning demonstrators to the ground, with blood marking the pavement. It's the 14th week of protests against police brutality in the city, sparked by the death of George Floyd in May. Floyd died after a Minneapolis Police officer knelt on his neck for almost 9 minutes.

Meanwhile in Rochester, New York, large crowds gathered over the police killing of Daniel Prude. Prude died a week after an encounter with police.  In body camera footage, Prude is seen naked being handcuffed by police. He grows increasingly unsettled and officers placed a so-called spit hood over his head, hold his face to the pavement and kneel on his back. His death has been ruled a homicide.

Prior to the Friday's march, Prude's brother tearfully told the crowd: "This is an unstoppable moment right now." The demonstration started peacefully but escalated later when police say protesters started throwing bottles and eventually fireworks at them. Officers responded with pepper spray and tear gas.

And in Manhattan, police say Black Lives Matters protesters caused $100,000 in property damage. Around 150 protesters reportedly smashed windows of two Starbucks, five banks and a drug store. Eight people were arrested and charged with rioting. Some were also charged with possessing weapons or burglary tools.