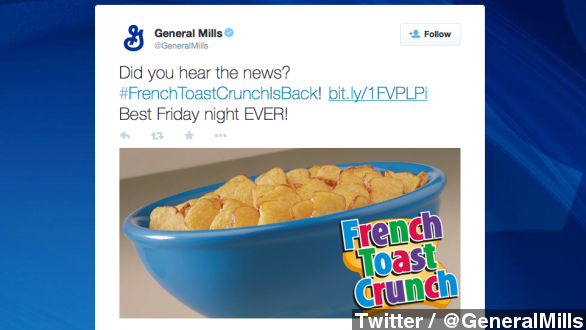 Rejoice, 90s kids! Another nostalgic product is on its way back — allow us to re-introduce French Toast Crunch.

General Mills announced the return of cereal in a blog post on Friday, saying they were overwhelmed by consumer requests and passion for the cereal to come back. General Mills wants everyone use #FrenchToastCrunchIsBack to spread the word about the cereal's January return.

That might be because social media played a part in bringing the cereal back. The company posted tweets of fans professing their love for the tiny toast. That didn't even include the fact that an online petition and Facebook page pressed for the cereal's return.

So, why bring back the product now? As it turns out, there could be financial reasons.

If General Mills is looking at using nostalgia to boost sales, it might be hoping to emulate Coca-Cola's Surge.

In September the soft drink giant brought back the bright green, lemon-lime drink and cited consumer demand. A lot of that demand was from the online SURGE Movement.

And that move paid off big time for Coke. The drink, sold exclusively through Amazon, kept selling out after it debuted. Three months later and Surge is Amazon's top selling soft drink.

Both French Toast Crunch and Surge sat near the top of BuzzFeed's list of childhood foods that had gone extinct. The top spot though? That belonged to Crispy M&M's.

Mars Chocolate announced in October that it was bringing back Crispy M&M's, also citing consumer demand. (Video via Mars)

So 90s fans, if there are any other products you want to come back start firing up those hashtags. The companies just might listen.