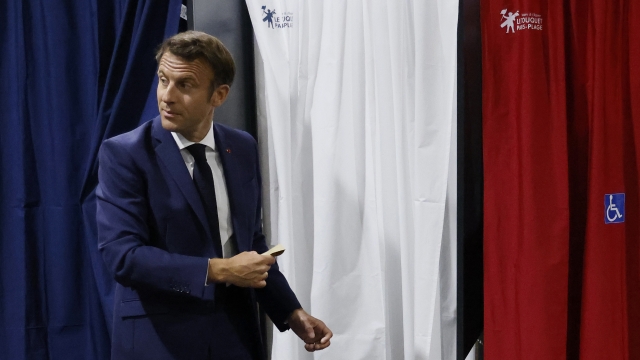 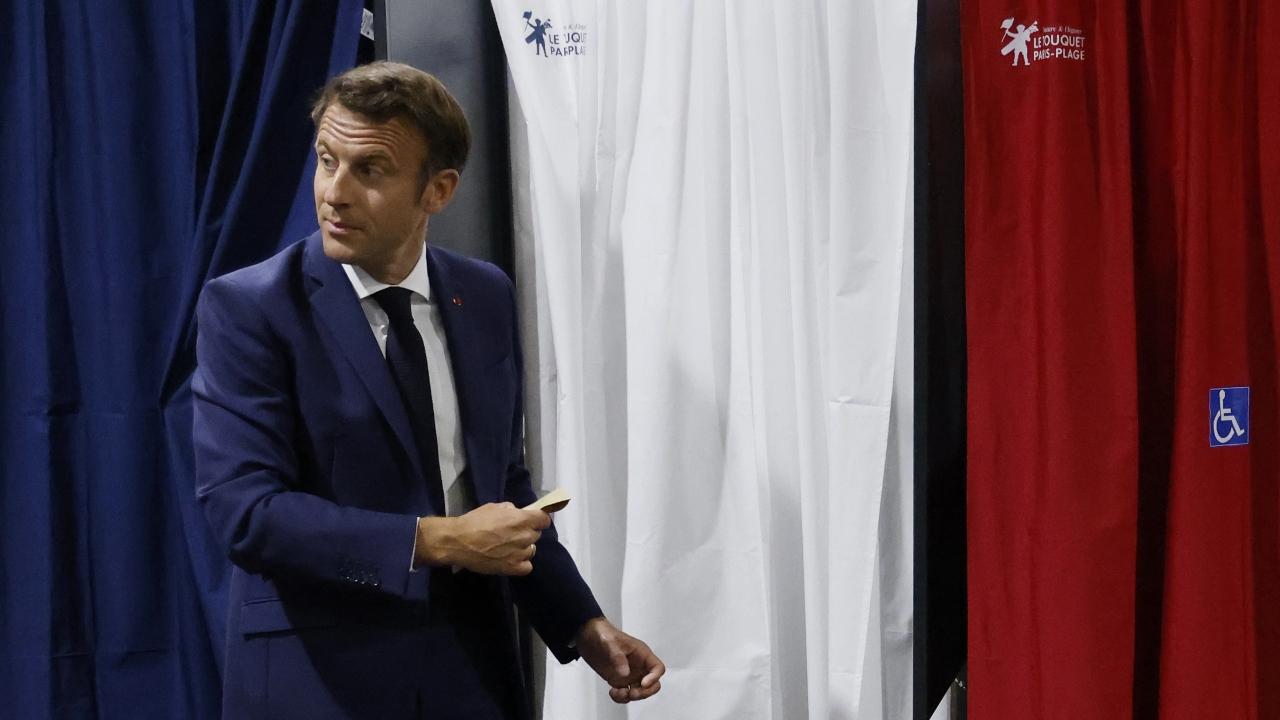 French President Emmanuel Macron's centrist alliance is expected to keep its parliamentary majority after the first round of voting Sunday, but will likely have far fewer seats than five years ago, according to projections.

Projections based on partial election results showed that at the national level, Macron's party and its allies got about 25%-26% of the vote. That was neck-and-neck with estimates for a new leftist coalition composed of hard-left, Socialists and Green party supporters. Yet Macron's candidates are projected to win in a greater number of districts than their leftist rivals, giving the president a majority.

More than 6,000 candidates, ranging in age from 18 to 92, ran Sunday for 577 seats in France's National Assembly in the first round of the election.

France's two-round voting system is complex and not proportionate to the nationwide support for a party. For races that did not have a decisive winner on Sunday, up to four candidates who got at least 12.5% support each will compete in a second round of voting on June 19.

Following Macron's reelection in May, his centrist coalition was seeking an absolute majority that would enable it to implement his campaign promises, which include tax cuts and raising France's retirement age from 62 to 65.

Yet Sunday's projection shows Macron's party and allies could have trouble getting more than half the seats at the Assembly, much less than five years ago, when they won 361 seats. Polling agencies estimated that Macron's centrists could win from 255 to over 300 seats, while the leftist coalition led by Jean-Luc Mélenchon could win more than 200 seats.

Sunday's turnout reached a record low for a parliamentary election, with less than half of France's 48.7 million voters casting ballots.

Prime Minister Elisabeth Borne said "we have one week of action, one week to convince, one week to get a strong and clear majority."

"Faced with the situation in the world and the war at Europe's doors, we cannot take the risk of instability," she said, urging voters to gather behind Macron's alliance in the second round. "Faced with extremes, we will not yield."

Mélenchon, who had hoped the election would vault him into the prime minister's post, did not accept the preliminary projections, insisting that his coalition came in first.

"Projections in numbers of seats at this hour make quite no sense," he said.

Mélenchon urged the French to choose his coalition's candidates in the second round and "definitively reject the doomed projects of the majority of Macron." His platform included a significant minimum wage increase, lowering the retirement age to 60 and locking in energy prices, which have been soaring due to the war in Ukraine.

Even though Macron beat far-right rival Marine Le Pen in the presidential runoff, France's parliamentary election is traditionally a difficult race for far-right candidates. Rivals from other parties tend to coordinate or step aside to boost the chances of defeating far-right candidates in the second round.

Projections showed that Le Pen's far-right National Rally party could get 10 to 30 seats — up from eight five years ago. If it passes the threshold of 15 seats, it can form a parliamentary group and gain greater power at the assembly.

Le Pen, who ran for reelection in her stronghold of Henin-Beaumont, in northern France, praised Sunday's results.

"Next Sunday, it is important not to let Emmanuel Macron get an absolute majority, which he will abuse to implement his self-centered and brutal methods and impose his anti-social project," she said.

Le Pen called on voters to vote blank or not go to the polls in districts that have only Macron's or Mélenchon's candidates.

Outside a voting station in a working-class district of Paris, voters debated whether to support Macron's party for the sake of smooth governance and keeping out extremist views, or to back his opponents to ensure that more political perspectives are heard.

"When you have a parliament that's not completely in line with the government, that enables more interesting conversations and discussions," said Dominique Debarre, retired scientist. "But on the other hand, (a split) is always in some way a sign of failure."