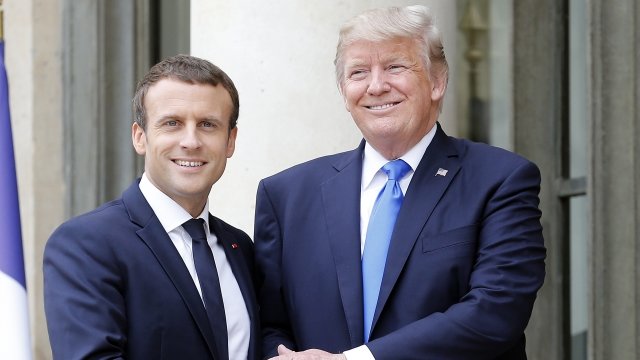 "The United States will not tell you how to live or work or worship. We only ask that you honor our sovereignty in return," he said.

Soon afterward, French President Emmanuel Macron seemed to rebuke Trump's comments during his own speech at the U.N.

"I never stop upholding the principle of sovereignty," Macron said. "Even in the face of certain nationalism, which we're seeing today, brandishing sovereignty as a way of attacking others."

Trump also told the year's largest gathering of world leaders that Americans "reject the ideology of globalism" and that "America will always choose independence and cooperation over global governance, control and domination."

Macron responded to that, too, by saying he rejects Trump's ideas on globalism.

But Macron's harshest criticism had to do with the Paris climate agreement, which Trump withdrew the U.S. from in 2017.

"We will no longer sign commercial agreements with powers that do not respect the Paris accord," Macron said.

He later clarified his comments by saying he thinks there could still be agreements with individual sectors as long as they are neutral on climate.