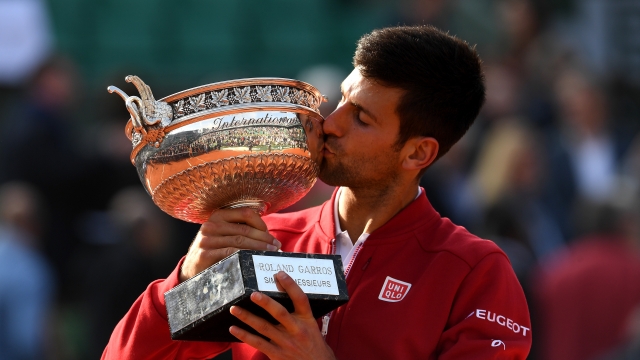 Djokovic dropped the first set against Andy Murray 3-6 but dominated the rest of the way, winning the next three sets 6-1, 6-2, 6-4. The Serbian tennis star said clinching the title was "perhaps the greatest moment of my career."

His path was made easier since he was able to avoid Rafael Nadal, who had to withdraw from the tournament with a wrist injury. The Spaniard has dominated on the clay courts at Roland Garros, winning nine French Open titles since 2005.

The 29-year-old is now the reigning champion of all four major tournaments: the Australian, French and U.S. opens and Wimbledon. Djokovic is only the third man to hold all four Grand Slam titles at once and the first since Rod Laver in 1969.

The win puts Djokovic halfway to the 2016 calendar-year Grand Slam. He needs to win this year's Wimbledon and U.S. Open to achieve tennis's most impressive feat.

This video includes clips from the Australian Open and Roland Garros and images from Getty Images. Music provided courtesy of APM Music.