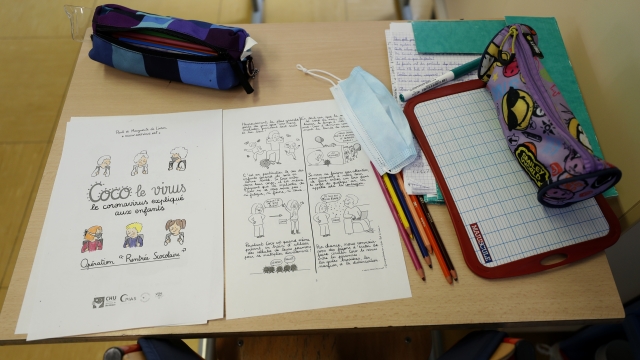 SMS
France Pulls Back On School Reopening Plans Amid COVID-19 Spike
By LeeAnne Lowry
By LeeAnne Lowry
August 30, 2020
Reopenings will now be decided on a day-by-day analysis of the situation in each territory.
SHOW TRANSCRIPT

France may be pulling back on its school reopening plans due to a recent spike in COVID-19 infections.

The return of France's 13 million students to the classroom has been touted as a way to help parents get back to work and aid poorer students who may not have remote learning tools like laptops and internet. French schools had been set to resume Tuesday largely as normal.

But now the country's education minister says reopenings will be decided on a "day-by-day analysis based on the health situation of each territory."

The country reported over 7,300 new cases on Friday. That's its highest number of new cases since early May. In response, the country imposed a new mask mandate for Paris.

France went into a strict lockdown in March, but has been gradually lifting restrictions since mid-May. In total, it has seen over 300,000 confirmed cases and more than 30,000 deaths.

President Emmanuel Macron told journalists, "We're doing everything to avoid another lockdown, and in particular a nationwide lockdown."