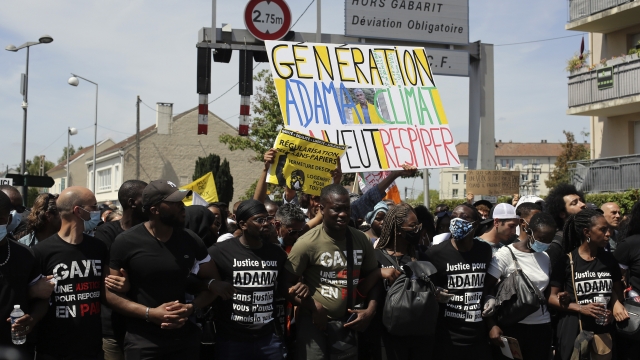 French protesters marched through a Paris suburb Saturday to mark the fourth anniversary of the death of a Black man in police custody.

Adama Traoré died in July 2016 on his 24th birthday. Police stopped him and his brother in an identity check. Traoré, who didn't have his ID, ran away. But its unclear exactly when or how he died. His family says he suffocated as a result of police piling on top of him.

In May, medical experts exonerated the three police officers involved. They say Traoré died of heart failure brought on by preexisting conditions. But French judges have ordered a new inquiry into the cause of death. Those results are expected by January.

Saturday's march is one of a recent string of protests in France sparked by the death of George Floyd, a Black American who died while in police custody in May.

Last month the French government decried any semblance of racism in the country and vowed to take a harder line on suspected racist incidents within police forces.

Additional reporting by Arno Pedram of the Associated Press.