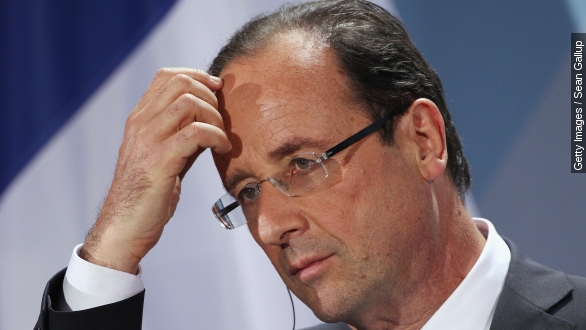 The UMP, led by former president Nicolas Sarkozy, took a majority in at least 66 of the 98 local districts that voted on Sunday. That's a big increase from the 41 they hold currently. (Video via The Telegraph)

Many are looking at these local elections as a test of the political waters ahead of 2017's presidential election.

The UMP Partly has been taking advantage of Hollande's unpopularity with voters amid high unemployment rates.

The far-right National Front party also made small but widespread gains, in what The Guardian calls an election performance that "[cements] the Front Nationals's transformation from what was once a simple national protest vote to a locally anchored movement."

With many voters turning away from Hollande's socialist party to his rivals on the right, some outlets are pointing to Sunday's results as a sign of a changing political landscape in France.

French Prime Minister Manual Valls admitted defeat for his Socialist party, saying, "The French have declared ... their anger at a daily life that is too difficult." He said his focus going forward will be to boost the economy and create jobs. (Video via Euronews)