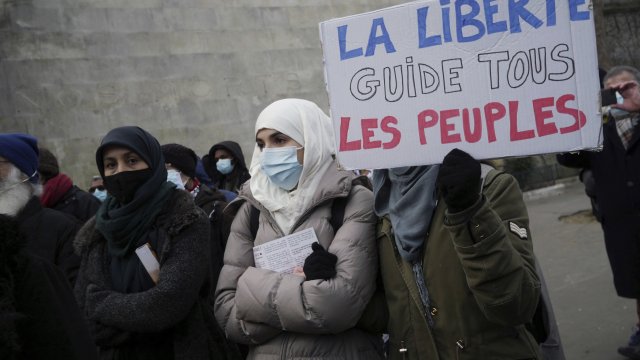 French President Emmanuel Macron's landmark bill to fight Islamist extremism passed a major hurdle this week amid a raging debate in France -- and across Europe -- on how to control domestic radicalization.

The sweeping bill, which just cleared the French lower house and is expected to become law later this year, strengthens government oversight of mosques, schools and sports clubs.

While Macron and his allies say it is essential to prevent radical ideas from spreading and inspiring violence, critics say the French lawmakers are unfairly singling out Islam.

"Clearly there are issues of religious violence and extremism within the Muslim community. But do you hold the second-largest religious population in France accountable for the actions of one, two, three people?" asks Amir Hussain, a scholar of Islam at Loyola Marymount University.

The legislation gained urgency after a French teacher was beheaded in October by a radical Islamist who grew up in France.

Besides adding oversight on community groups that receive public or foreign funds, the bill extends a ban on overt religious symbols beyond public employees to anyone who's a private government contractor, like bus drivers.

"I think it is a way of Emmanuel Macron saying we cannot have this kind of separatist identity where, according to the government, people can go from cradle to grave without ever sort of really coming across the French Republic," observes Victor Mallet, the Paris bureau chief for the Financial Times.

Macron, who is up for reelection in 15 months, is hoping to lure conservative voters — though far-right candidate Marine Le Pen says the bill doesn't go far enough.

"It's a lot of tension in a way between the view of the state, the Republican French state, that everybody is a French citizen and we don't care what you are. And an increasing number of especially younger people, and younger Muslims, saying actually, we do want to identify as Muslims," said Mallet.