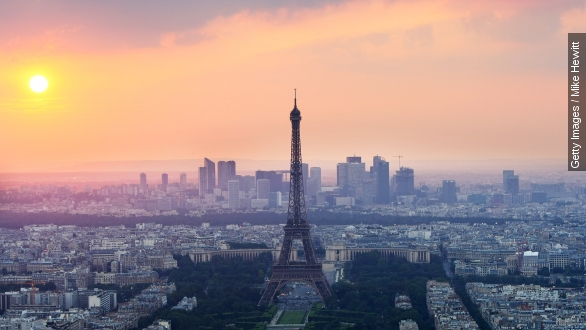 French authorities say they've foiled a potential terrorist attack planned for at least one church in Paris. This comes after the arrest of a university student Sunday, France's interior minister announced Wednesday.

Officials say the unnamed 24-year-old Algerian national is suspected of killing a woman in her car Sunday, before being arrested. (Video via France Télévisions)

French Interior Minister Bernard Cazeneuve announced Wednesday an arsenal of weapons, including Kalashnikov-style automatics, knives, bullet-proof vests, and more, were found in the student's home and vehicle. Cazeneuve said "without any ambiguity" the suspect planned to carry out a terror attack. (Video via French Interior Ministry)

"He was already known by French secret services because he had apparently expressed desire to travel to Syria last year and allegedly another time this year," France 24 reported.

The man had been investigated twice before, but secret services did not find anything concerning enough to warrant further investigation.

France's interior minister said the man was arrested after he shot himself in the leg and called for an ambulance. That's when the weapons and documents were found.

French security is on heightened alert after a spree of attacks in January on the offices of the satirical newspaper Charlie Hebdo and elsewhere in Paris claimed the lives of 20 people, including the gunmen. (Video via i-Télé | ABC)