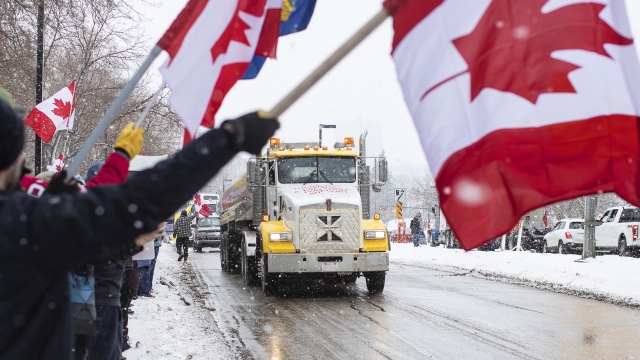 The mayor of Canada's capital declared a state of emergency Sunday and a former U.S. ambassador to Canada said groups in the U.S. must stop interfering in the domestic affairs of America's neighbor as protesters opposed to COVID-19 restrictions continued to paralyze Ottawa's downtown.

Mayor Jim Watson said the declaration highlights the need for support from other jurisdictions and levels of government. It gives the city some additional powers around procurement and how it delivers services, which could help purchase equipment required by front-line workers and first responders.

A top Parliament security official advised lawmakers to lock their doors amid reports their private homes may be targeted.

Thousands of protesters descended in Ottawa again on the weekend, joining 100 who remained since last weekend. Residents of Ottawa are furious at the nonstop blaring of horns, traffic disruption and harassment and fear no end is in sight after the police chief called it a "siege" that he could not manage.

Crowdfunding site GoFundMe said it would refund or redirect to charities the vast majority of the millions raised by demonstrators protesting in the Canadian capital. The site said it cut off funding for the organizers because it had determined the effort violated the site's terms of service due to unlawful activity.

In Canada's largest city, Toronto, police controlled and later ended a much smaller protest by setting up roadblocks and preventing any trucks or cars from getting near the provincial legislature. Police also moved in to clear a key intersection in the city.

Protesters have said they won't leave until all mandates and COVID-19 restrictions are gone. They are also calling for the removal of Prime Minister Justin Trudeau's government, though it is responsible for few of the measures, most of which were put in place by provincial governments.