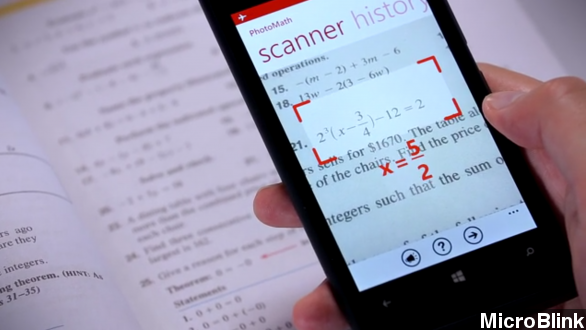 Is it a great new learning tool or the easiest way to cheat in math, ever?

The new PhotoMath app is currently available on iOS and Windows phones, and your views on it will likely depend on whether you're a student or a teacher.

You know, the type of math problems that make you solve for "x."

Amazingly, the app doesn't just spit out a result for you, either. It uses your phone's camera to identify equations, and then it solves them, letting you see the step-by-step guide to getting the answer. (Video via MicroBlink)

For those of us who can still hear the echoes of "show your work" from math teachers past, this app is nothing short of miraculous.

As long as the formula is typed, not handwritten, PhotoMath can also calculate fractions, decimals, powers and roots.

As CNN put it: "Say it with us: Kids today have it sooooo easy."

Obviously, the invention of this brainy app might make math teachers lament that kids won't be forced to learn algebra properly when PhotoMath can actually do their homework for them, showing them all the right steps along the way.

But, according to MicroBlink's co-founder, the inspiration for this app came from a nobler place. (Video via TechCrunch)

When discussing his company's photo-recognition software, he told TechCrunch in October, "Yesterday we launched an app, which uses this technology, to help kids around the world learn math."

PhotoMath will be available for Android in early 2015. We think Yahoo said it best: "Let me take a mathie."