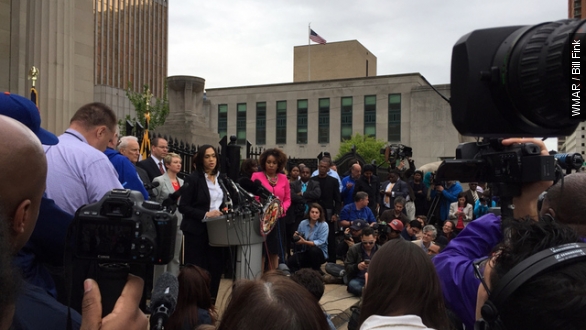 "The findings of our comprehensive, thorough and independent investigation coupled with the medical examiner's determination that Mr. Gray's death was a homicide has led us to believe we have probable cause to file criminal charges," Baltimore State's Attorney Marilyn Mosby said.

Baltimore's chief prosecutor, Marilyn Mosby, announced during a Friday news conference that warrants have been issued for the arrest of the six officers involved in Freddie Gray's death.

The announcement comes after Mosby's office reviewed the findings of the Baltimore Police Department's initial investigation. (Video via WMAR)

While in police custody, 25-year-old Gray died of a spinal injury. The big question: What caused it?

Mosby blamed Gray's 40-minute ride inside the back of the police van, noting he was shackled and handcuffed but not restrained by a seat belt. (Video via WMAR)

She also called Gray's arrest illegal. His knife, she said, was not a switchblade and therefore was legal under Maryland law. (Video via WMAR)

According to a release from Mosby's office, the 45-year-old officer driving the police van was charged with second-degree murder, manslaughter and other charges. The other five officers face charges ranging from manslaughter to assault and misconduct.

In a letter, the Baltimore police union defended the conduct of all six officers, saying they acted "diligently."

The union has questioned Mosby's relationship with the Gray family attorney and has asked her to appoint a special independent prosecutor to review the case.