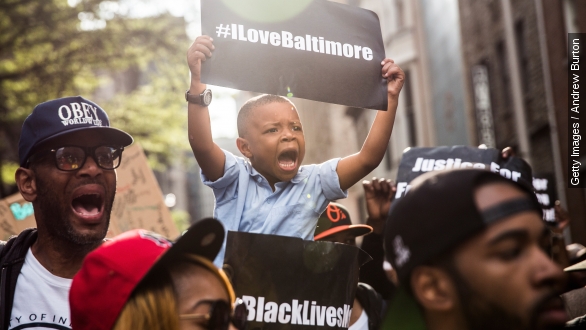 SMS
Freddie Gray Case Gets Even More Complicated
By Jay Strubberg
By Jay Strubberg
May 1, 2015
Among the recent developments in Baltimore: State's Attorney Marilyn J. Mosby will spearhead a new investigation.
SHOW TRANSCRIPT

There have been new developments in the death of Freddie Gray, the man who died while in police custody early last week in Baltimore.

Baltimore City's State's Attorney Marilyn J. Mosby will be spearheading a new investigation. She said in a statement Thursday the Baltimore City Police Department has given her office copies of the investigative file into Gray's death. (Video via NewsOne Now)

Thirty-five year old Mosby has been Baltimore's chief prosecutor for less than five months and is now tasked with unraveling a case that has been the catalyst for nationwide protests and riots across the city.

"The language is something to the effect of they will be conducting their own investigation, not relying simply on the facts of what the Baltimore City Police Department has delegated over to them," a WMAR reporter said.

Mosby steps in as more and more layers have been added to Gray's mysterious death.

According to WJLA and another outlet, law enforcement sources say a medical examiner found "Gray's catastrophic injury was caused when he slammed into the back of the police transport van, apparently breaking his neck; a head injury he sustained matches a bolt in the back of the van." Though, WJLA says it's unclear what would've caused Gray to do that.

This follows an earlier report by The Washington Post that seems to support those findings.

According to police documents obtained by The Post, a detainee riding in the same transport van as Gray, who was separated from him by a metal partition, told officials he heard Gray "banging against the walls" as if he “was intentionally trying to injure himself."

But WJZ-TV spoke with that detainee who says they twisted his words and that's not what he said.

Others are skeptical of those leaks too, including the executive director of ColorOfChange.org, who released a statement blasting the authorities in charge.

The Baltimore City State's Attorney's Office did not reveal a timetable for their investigation.