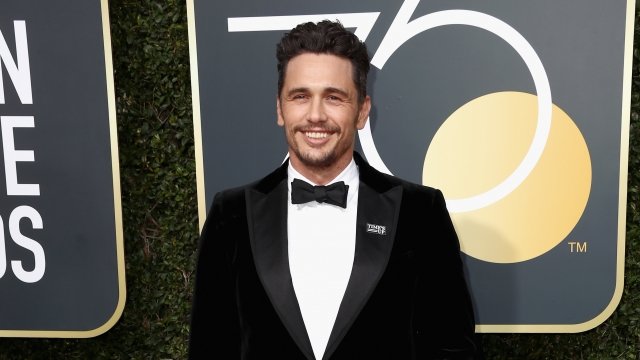 Actor James Franco is facing backlash after showing support for the Time's Up movement at the Golden Globes.

Franco attended the Golden Globes donning all black and wearing a "Time's Up" pin on his collar, but some Twitter users were quick to point out the hypocrisy: Franco himself has been accused of sexual misconduct.

Time's Up is a movement aimed at ending inequality in the workplace and helping those who have been sexually harassed or abused.

Buzzfeed writer Doree Shafrir tweeted, "It's ... rich of James Franco to be wearing a Time's Up pin." And author Jessica Valenti tweeted a reference to a report from 2014 that Franco allegedly asked a 17-year-old to visit him in a hotel room.

On "The Late Show with Stephen Colbert," Franco said the tweets he read were "not accurate" but that he "completely support[s] people coming out and being able to have a voice."

Franco told Colbert, "If there's restitution to be made, I will make it," adding, "I'm here to listen and learn and change my perspective where it's off."

Franco and his brother Dave Franco were slated to speak Wednesday about their award-winning movie "The Disaster Artist" at a New York Times event, but the event was canceled.