Francis Doesn't Care For Popemobile: 'For Me, It's A Wall' 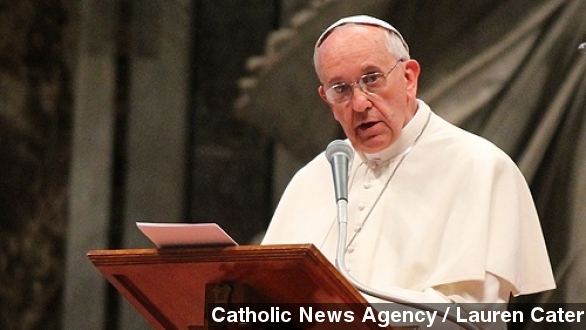 SMS
Francis Doesn't Care For Popemobile: 'For Me, It's A Wall'

By Elizabeth Hagedorn
June 14, 2014
Pope Francis told a Spanish newspaper he prefers not to use the Popemobile because the bulletproof vehicle keeps him from engaging with the people.
SHOW TRANSCRIPT

You may know it as the Popemobile, but to the man riding inside, it’s more like a “sardine can.”

This week, Pope Francis told a Spanish newspaper he prefers not to use the bulletproof vehicle. "I cannot greet the people and tell them I love them inside a sardine can, even if it is glass, for me it’s a wall … It's true that anything could happen, but let's face it, at my age I don't have much to lose.” (Via La Vanguardia)

We can’t say we’re surprised. Pope Francis has made a habit of ditching the Popemobile when he can to get closer to crowds. (Via The Vatican)

Even during risky high-profile trips — like his recent visit to the Middle East. Much to the chagrin of his security staff, he opted for an open top car. (Via Catholic News Service)

His decision to ride in a hatchback Fiat during this July 2013 trip to Rio De Janeiro created a massive security headache. This, after his car was mobbed by ecstatic crowds of Brazilians. (Via BBC)

And who can forget the time he jumped out of his car to stop for selfies on Palm Sunday. (Via Euronews)

His mode of transportation, of course, made headlines when shortly after his inauguration he swapped his luxury Mercedes for a second-hand 30-year-old Renault. (Via Global Post)

And he’s also been known to take the bus to get around Vatican City. (Via Time)

His no-frills method of travel stands in sharp contrast to previous pontiffs. For more than 80 years, popes have relied on the Popemobile for protection when in public.

After an assassination attempt on Pope John II in 1981, the Popemobile was fitted with bulletproof glass. (Via ABC Australia)

It's a far cry from the original Popemobile — an ornate portable ​papal throne carried through crowds by Vatican footmen. Something tells us Pope Francis wouldn't go for that either. (Via Wikimedia Commons / Jebulon)