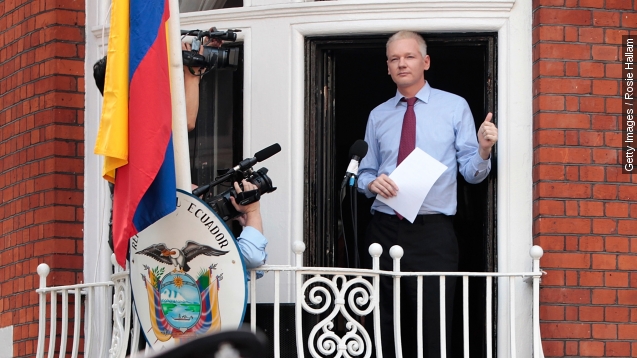 The letter was published in French newspaper Le Monde Friday. Assange wrote, "By welcoming me, France would carry out a humanitarian and symbolic gesture, sending encouragement to every journalist and whistleblower."

Assange said his life is in danger, but in its rejection, Hollande's office said, "Mr. Assange's situation presents no immediate danger."

Ecuador granted Assange political asylum in 2012 and he has been living in the country's London embassy for the past three years.

Assange has been accused of sexual assault in Sweden, and there is a warrant for his arrest in Europe, but he has denied the allegations. He says they are part of an attempt to extradite him to the U.S. (Video via Vice)

Assange says the U.S. wants to charge him for publishing sensitive documents on Wikileaks that were leaked to him by Chelsea Manning, who is in prison for violating the Espionage Act. Assange has not been charged with a crime in the U.S., and there hasn't been an extradition request. (Video via TeleSur)