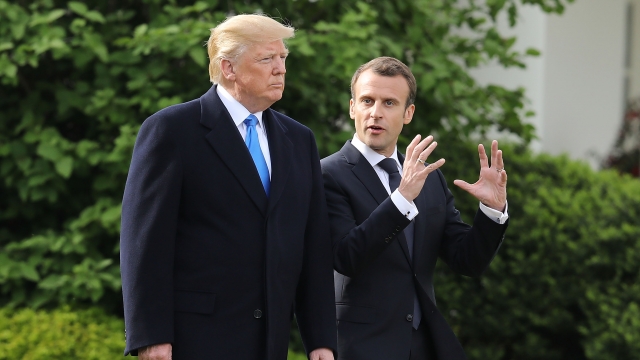 SMS
U.S.-France Trade Fight Is The Latest Front In Digital Tax Debate
By Matt Picht
By Matt Picht
December 5, 2019
The latest U.S.-France trade dispute has its roots in a much broader debate about the tech industry and global taxation.
SHOW TRANSCRIPT

The trade fight brewing between the U.S. and France stems from a new global problem: how should big tech companies that do business on the internet be taxed around the world?

During a meeting with French President Emmanuel Macron, President Trump said, "We want to tax American companies, that's important. We want to tax them, they're not for somebody else to tax."

The U.S. is threatening new tariffs of up to 100 percent on around $2.4 billion worth of French imports: those include things like cheeses, handbags, and sparkling wine. It's retaliation for a recent French tax that the Trump administration. says has unfairly singled out American tech companies.

Rachael Stelly, Policy Counsel for the Computer and Communications Industry Association, told Newsy: "They've referred to it as the GAFA tax, which is a moniker to use Google, Amazon, Facebook, and Apple. So it's a combination of the rhetoric and how the tax is structured."

France's complaint is that big tech companies are able to use global tax rules to shift much of their worldwide earnings to places with lower tax rates. The tactic lets companies avoid paying higher taxes in some of the countries where they do business.

France's digital tax, passed in July, is trying to change that. It's directly taxing digital services revenue made in the country by 3 percent.

France isn't alone in its push to start taxing digital services directly. Italy, Austria and Turkey have all drawn similar scrutiny from the U.S. over their plans to impose digital taxes.

Jason Oxman, President and CEO of the Information Technology Industry Council, told Newsy: "If countries like France adopt their own unilateral taxation regimes, it makes it less likely that the OECD solution will apply worldwide as we need it to. It would be better if the OECD were the solution, and that we didn't move forward with individual country solutions in the interim."

The OECD is expected to release its digital tax proposals by the end of 2020. France says it'll back off of its digital tax once the OECD rules are in place, but it's also vowed to push back with its own trade retaliation if the U.S. goes through with its tariff plans.