France Is Going To Completely Close 'The Jungle' Migrant Camp 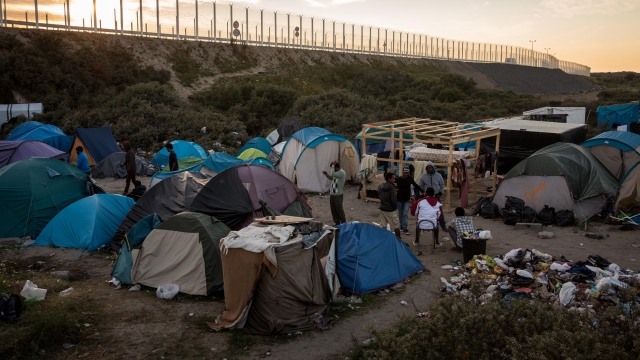 SMS
France Is Going To Completely Close 'The Jungle' Migrant Camp
By Briana Koeneman
By Briana Koeneman
September 26, 2016
The French government has tried to close "The Jungle" in Calais multiple times. But so far, each attempt has failed.
SHOW TRANSCRIPT

France is shutting down "The Jungle" migrant camp in Calais.

French President François Hollande said during a visit to the city Monday the controversial camp will be dismantled "completely and definitively."

The French government has tried to close "The Jungle" multiple times. But so far, each attempt has failed.

Authorities estimate there are about 7,000 migrants and refugees currently living in the camp's filthy and sometimes dangerous conditions.

Many of those refugees have used the camp's proximity to the Calais port to try to enter the U.K. Hollande is now calling on Britain to help the thousands of migrants desperately trying to cross over.

"I'm determined to see the British authorities play their part in the humanitarian effort that France is undertaking here," Hollande said.

For its part, the U.K. began building a wall last week to to prevent migrants from making their way from the camp to the port. Construction is expected to be completed by the end of the year.

Hollande promised to set up reception centers to take in refugees from "The Jungle" once the camp is closed but did not say when the dismantling process will begin.