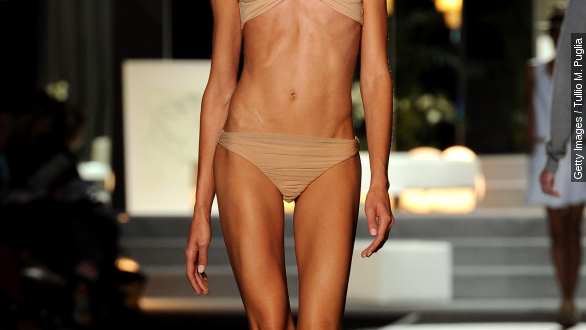 French lawmakers have taken a monumental step toward addressing a dangerous and popular characteristic in the fashion industry — weight, or lack thereof. This week, the lower house of France's parliament approved a law that will ban modeling agencies from hiring underweight models.

The law doesn't just target extremely thin models but also bans "pro-anorexia" websites and there are tons of them out there encouraging women to lose weight. Using so-called "thinspiration," some outlets claim the sites promote the development of eating disorders.

France's health minister explained that the bill "is an important message to young women, young women who see these models as an aesthetic ideal."

This is especially true in France where, according to the neurologist who wrote the bill, “between 30,000 and 40,000 people,” mostly teens, suffer from an eating disorder.

Isabelle Caro was one of those women. Living with anorexia for most her her life, the model advocated against the disease until her death in 2010.

The logistics of the bill are pretty stiff.

BBC reports, "Very thin models would be required to prove that they have a minimum body mass index or BMI of 18. They do that through a medical certificate and then they'd be subjected to periodic weigh-ins."

Agency officials found violating the guidelines could be subject to a fine of more than $80,000 and six months in jail.

Other countries like Spain, Italy and Israel have also enforced laws to counteract the glorification of extremely thin physiques in the fashion industry. (Video via ITN)

According to CNN, "Israel even has strict rules on how model's bodies are photoshopped. Any changes must be clearly marked on the photo. But France would be the biggest industry to throw its weight behind these rules."

The passing of France's bill comes after a proposal for similar regulations in the county was shot down in 2008. The bill now goes to the French senate for consideration.