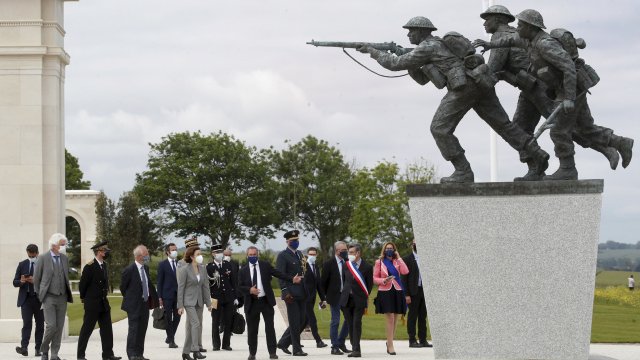 The sun rose over Omaha Beach Sunday morning ahead of various celebrations to commemorate the Allied troops who landed on that Nazi-occupied shore 77 years ago.

Virus restrictions prevented some veterans and families of fallen soldiers from the U.S., Britain, Canada and other Allied countries from making the trip to France. Some events were canceled, while others had limited guests.

But some D-Day celebrations still kept the memory alive, like one honoring Charles Shay, one of the few survivors of the battle and the only veteran to attend. The 96-year-old talked of the many good friends he lost on the battlefield.

"In France, the people remember these men. They hold them close to their heart and they they remember what they did for them," Shay said. "And I don't think the French people will ever forget."

In some parts of the country, residents and visitors sat through rain to watch an unveiling of a new memorial.

"It's a timeless reminder of the remarkable scale of sacrifice 77 summers ago for the liberation of France and the D-Day landings and the Normandy campaign thereafter," Leo Docherty, British under-secretary of state for defence people and veterans, said.

"Welcome, veterans, to your memorial."

And others stood for the inauguration for the British Normandy Memorial, which bears the names of more than 22,000 men and women from 30 countries who gave their lives under British command.

"I know how reluctant our veterans are to be described as heroes," said Lord Edward Llewellyn, British ambassador to France. "The real heroes, you always say, are those who never came home: your mates. Their names are here now, thanks to you, together in this place of honor."