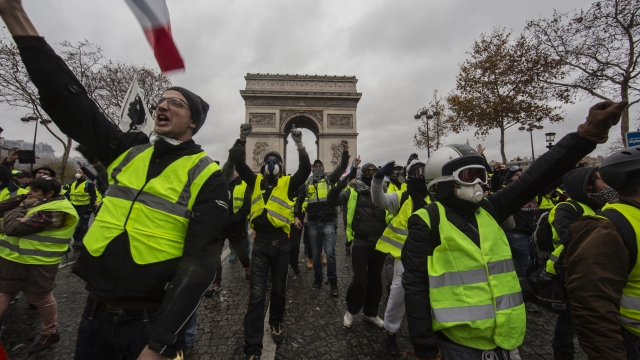 SMS
France Bans Some Yellow Vest Protests After Latest Demonstrations
By Ahmed Jawadi
By Ahmed Jawadi
March 18, 2019
​France's prime minister said protesters will no longer be able to organize in "the most impacted" neighborhoods in ​​Paris, Bordeaux and Toulouse.
SHOW TRANSCRIPT

Following another weekend of violent Yellow Vest protests that damaged some businesses, France's prime minister announced a ban on demonstrations in certain areas.

French Prime Minister Edouard Philippe said Yellow Vest protesters will no longer be able to organize in "the most impacted" neighborhoods in Paris, Bordeaux and Toulouse. He also announced he's replacing Paris's police chief, and that the department will begin stepping up efforts against rioters in the future.

French President Emmanuel Macron said the bans were necessary, as he likened Saturday's events more to hooliganism than "a protest by free citizens." He added that "what we have now is people who don't remember why they're in the streets, apart from to destroy things ... And so what we've decided to do ... is to adapt the public order system so the response is different from that for a protest."

Last Saturday's protest, which saw nearly 10,000 people participate, was particularly violent. Rioters threw smoke bombs at police and set fires to buildings along the famed Champs-Élysées Avenue in Paris. Officials say 91 businesses were hit, with nearly all of them suffering serious damage. It was the 18th straight weekend of Yellow Vest protests. The demonstrations originally were sparked by frustration with high taxes, but have morphed into a larger issue with class and wealth inequality.