Fox Pulls Back On 'Idol,' Focuses On 'Eventizing' 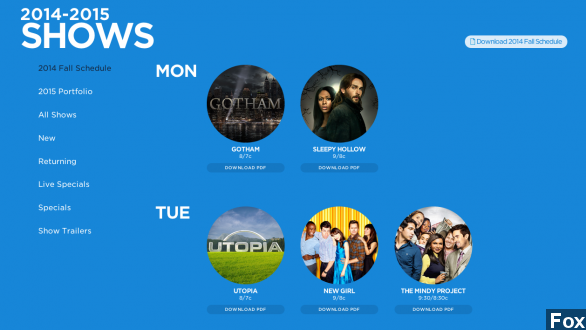 SMS
Fox Pulls Back On 'Idol,' Focuses On 'Eventizing'

By Brice Sander
May 13, 2014
Fox revealed its 2014-2015 TV schedule to advertisers Monday. The network plans to focus on "eventizing" younger-skewing programming.
SHOW TRANSCRIPT

Fox's fall TV schedule is all about "eventizing."

That's the made-up word network execs pushed at the net's upfront presentation Monday, putting the focus on limited-run and event series coming to the network starting later this year. (Via Fox)

They're joined by a string of high-concept projects, including Lee Daniels' first foray into TV with the Timbaland-scored musical drama "Empire" and "Gotham," a Batman prequel starring "O.C." alum Ben McKenzie. Its first season is only expected to run 16 episodes, following the model Fox set up with Kevin Bacon's "The Following" — its seasons only run 15 episodes.

The biggest push toward "eventizing" is new reality show "Utopia," which will follow 15 strangers attempting to build their own society. Viewers will be able to stream live footage 24/7 and watch it on TV twice a week.

Variety seems skeptical of the choices, though.

"The disparate nature of [these] shows — even if they look interesting — suggests more a sense of throwing things against the wall than a cohesive strategy. ... On the plus side, Fox can't be accused of cookie-cutter development."

But the network needs to shake things up — the 2014-2015 season is somewhat of a rebuilding year.

This past season saw major ratings declines for former hit shows "New Girl" and "Glee," which is set to enter its final season, and marked the end of troubled-from-the-start singing competition "The X Factor."

The network's former crown jewel, "American Idol," also hit ratings lows this year — and according to TVLine, it'll air just one night a week when it returns in 2015. "Idol" has been a twice-a-week show since its premiere in 2002.

​Live-action comedies "Brooklyn Nine-Nine" and "Mulaney" will mix in with "The Simpsons" and "Family Guy" this fall. (Via Fox)

Vulture says that move makes sense. The live-action shows share the same tone as the animated ones, and Fox needed to spread its sitcom assets beyond Tuesdays, where the network has focused them the past few years.

And The Wrap says all these changes are part of Fox's move to break the traditional broadcast cycle. Entertainment chief Kevin Reilly is all about transitioning Fox into "America's next generation network" with specialty programming targeted toward millennials.

We'll see if competitors ABC and CBS have similar plans when they announce their lineups this week.