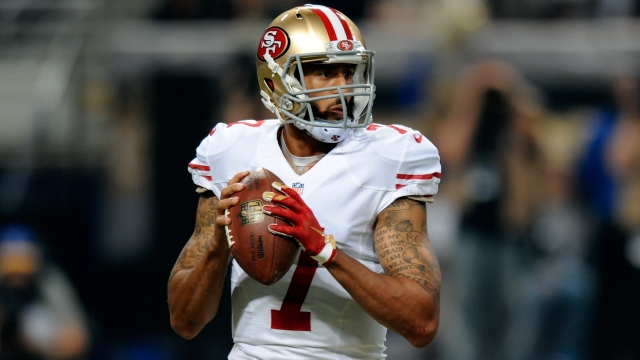 When San Francisco 49ers quarterback Colin Kaepernick explained why he chose to sit down during the national anthem during a recent preseason game, seemingly everyone weighed in on the decision.

Some lauded his decision to exercise his right to free speech on a controversial issue, while others slammed Kaepernick, saying he was disrespecting a country that gave him that right in the first place.

Even Kaepernick's fellow NFL players were split on how to react. Seattle Seahawks cornerback Richard Sherman defended his NFC West foe for speaking his mind but said the QB "could have picked a better platform."

But the debate took a strange turn when Fox News Radio host Brian Kilmeade was discussing the controversy with retired NFL star Joe Theismann. Kilmeade brought up the fact that the biracial Kaepernick was adopted by two white parents.

"And let's be honest. He was adopted by two white parents; he was well supported. He is a great athlete. I'm sure he worked hard; I also heard his grades were great. I don't know what [in] his experience could be so negative," Kilmeade said.

Kilmeade's comments seem to gloss over the fact that Kaepernick has explained that he isn't protesting any unfair treatment of himself, but issues he sees with how people of color in general are treated.

"Ultimately, it's to bring awareness and make people realize what's really going on in this country. There are a lot of things that are going on that are unjust, people aren't being held accountable for, and that's something that needs to change," Kaepernick told media.