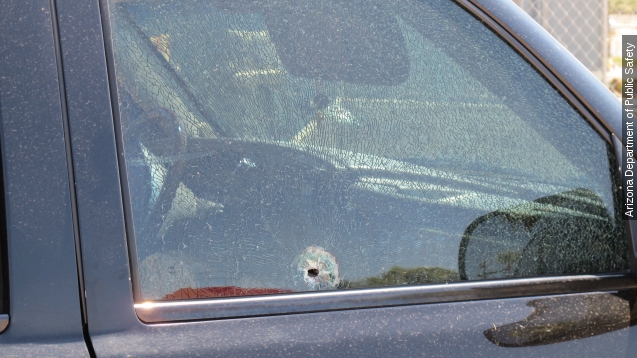 SMS
Four Vehicles Hit By Gunfire On Arizona Highway
By Matt Picht
By Matt Picht
September 4, 2015
Four vehicles have been hit by gunfire along a Phoenix highway. Arizona authorities are investigating.
SHOW TRANSCRIPT

Arizona Department of Public Safety Director Col. Frank Milstead told reporters, "We have someone or some people shooting guns at moving cars on Interstate 10."

Arizona authorities are investigating a string of bizarre incidents along a Phoenix highway. Over the span of three days, four cars traveling Interstate 10 were struck by bullets.

KNXV reports the shootings occurred at different locations along an eight-mile stretch of I-10. Thankfully, no one has been seriously injured in the shootings.

There doesn't appear to be any pattern to the shootings — the vehicles targeted were a car, an SUV, a truck and a tour bus. The Arizona Department of Public Safety has asked the general public to contact them if they know anything about the incidents.